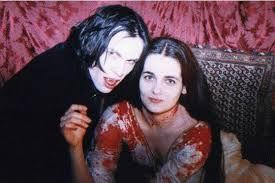 Three years after the cliffhanger conclusion of BLOODSTORM: SUBSPECIES III, and one year before mastermind Ted Nicolaou concluded the SUBSPECIES, Nicolaou helmed a "spin off" within his vampire cosmos. There's nothing in VAMPIRE JOURNALS that directly connects it to the SUBSPECIES films, but the writer-director worked a few JOURNALS characters into the fourth and last SUBSPECIES film, though only in a prequel-ish sense, since two of those characters had been killed in JOURNALS.

Regardless of the time-frame, JOURNALS is, like Nicolaou's other vampire-films, set exclusively in Romania, ostensibly in Bucharest. As in the first SUBSPECIES film there's a principal female character from America, in this case a young pianist, Sofie (Kirsten Cerre). Her piano performance attracts the attention of a "music-loving" master vampire named Ash (Jonathon Morris), and he sets plans to draw her into his web of sin, even though he already has a substantial coterie of mostly attractive vampires, principally one Cassandra (Ilinca Goya). He first approaches her with a well-traveled move, a single rose (to whose thorns Sofie loses a little blood), but when that doesn't win Sofie immediately, Ash arranges for a human servitor, Iris (Starr Andreef) to set Sofie up with a private concert.

Fortunately for Sofie, Ash is being stalked by vampire hunter Zachary (David Gunn)-- and when I say "vampire hunter," I mean it in both senses of the phrase: Zachary is a vampire who hunts vampires. Years ago the reluctant bloodsucker was "sired" by one Serena, who turned Zachary and executed his lady love. Zachary destroyed Serena, his "mother," and then decides to go after the vamp who sired Serena, who could be termed Zachary's symbolic father, though the two have never met. Zachary is also immediately attracted to the youthful Sofie-- though Zachary, unlike Ash, does not seem to be the centuries-old type of undead. Zachary stalks Ash to kill him, but ends up seeking to save Sofie from perdition. He succeeds in the first goal, slaying Ash with a legendary sword once owned by Ash himself (symbolic phallus, anyone?) But there's a downbeat conclusion in that Sofie does get turned at the conclusion, and must join Zachary in his dismal existence.

Though Nicolaou's formulation of vampire mythology is just as derivative as it is in the SUBSPECIES films, JOURNALS benefits from a clearer conflict, even if one doesn't invest in the Freudian "jealous father" trope. Oddly, while the SUBSPECIES series pursues the trope of the "repulsive vampire"-- the trope that most informs the original Stoker DRACULA-- JOURNALS is wholly invested in the trope of the "pretty vampire." Both Morris and Gunn portray glamorous male vamps, so that in theory the female viewer may find Sofie's predicament suitably enthralling no matter who wins. There are some odd myth-touches throughout, principally the name of the legendary blade: "the sword of Laertes."  In Greek myth Laertes is the father of Odysseus, and he has little mythic presence of his own, while Odysseus is only tangentially connected to "unquiet spirits" through his adventure in the underworld. Though there's no support for it, I'm moved to speculate that Nicolaou may have thought about borrowing from the more apposite Oedipus myth, which would have led to a "sword of Laius," named for the Greek ruler killed by his own son. But this is just an enjoyable side-notion.