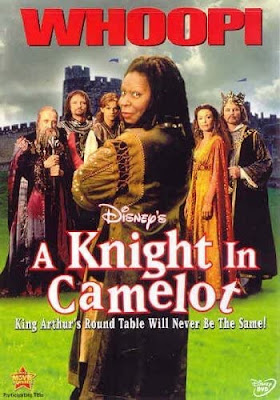 The unimaginative tag-line for this Disney TV-movie-- "King Arthur's Round Table will never be the same"-- sums up the witlessness of this umpty-teenth take on Mark Twain's A CONNECTICUT YANKEE IN KING ARTHUR'S COURT.

Whoopi Goldberg's career was going downhill at the time of this flick, though some might say that this dull KNIGHT is still better (in quality) than her hosting-job on THE VIEW. Goldberg mugs ferociously as Vivien Morgan, a scientist who experiments with gravity and accidentally triggers a time-dislocation, flinging her back to sixth-century Camelot, under the rule of King Arthur.

It's no surprise that the derivative script checks off most of the familiar tropes of the Twain novel. Time-traveler uses her foreknowledge to predict an eclipse? Check. Traveler aces out the phony wizard Merlin and uses modern science to establish her reign as "Sir Boss?" Check. Traveler gets involved in a duel with nasty knight Sagramore, which is played for baggy-pants comedy but still (just barely) qualifies for the combative mode? Check. (And was it really necessary to have King Arthur make Vivien into a knight the moment she makes the sun go bye-bye? Maybe the script could have led up to that development in some more subtle manner?)

Most of the new stuff, like Goldberg teaching the denizens of Camelot how to twist, is as lame as lame can be. There's a loose attempt to relate the rule of Camelot to the rise of American liberalism. Still, the writer wasn't as willing as Twain to banish all magic from Camelot, since at the end-- for which I'm not bothering to mention spoilers-- it turns out that the fake-seeming Merlin was really a super-farsighted sorcerer who arranged Vivien's trip. Some of the changes are more or less predictable. In the book Hank Morgan has an assistant named Clarence and marries a slave girl he names "Sandy," and the TV-script sticks these two characters together for some chaste teen romance. The book alludes to the eventual fall of Camelot because of the forbidden liaison of Lancelot and Guinevere, and so does the film-- but for some reason the writer makes Guinevere a real bitch instead of the usual star-crossed lover. Maybe this was the result of Amanda Donohue in the role, since she was inextricably associated with villainy. In the role of Arthur, Michael York has a nice speech toward the end.

Posted by Gene Phillips at 1:52 PM
Email ThisBlogThis!Share to TwitterShare to FacebookShare to Pinterest
Labels: combative comedies, the marvelous