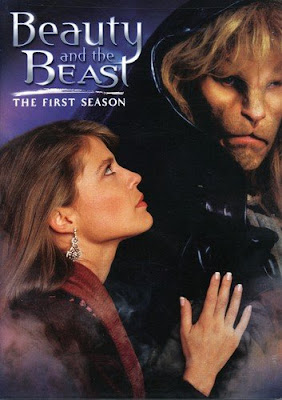 Here I’ll plunge into the episodes straightway, denoting any that possess high mythicity with a * before each title. To any readers who desire background, they may find some here.

*“Once Upon a Time in New York”—Catherine Chandler, grown daughter of a widowed lawyer-father and comfortable mixing with the rich elites of New York, suffers life-threatening injury when hired thugs mistake her for their intended target. Vincent, a man who looks a bit like Cocteau’s leonine “Beast” from the 1946 film, finds Catherine’s discarded body and takes her to the World Below to be healed. During her recuperation Catherine becomes empathically bonded to Vincent, even after she learns of his freakish appearance. Returning to New York, Catherine rather rapidly gains the position of Assistant District Attorney and begins investigating the men who attacked her. As a mark of her will to become a hero, she even gets trained in street-fighting by Ron “Superfly” O’Neal. Inevitably Catherine tracks down the crooks, but her distress brings Vincent racing to her rescue. Catherine alone witnesses him claw all of the hoods to death. Afterward a police detective swears that he’ll find the killer, but though Vincent knocks other undesirables in the course of the first season, there’s no sign that anyone in the NYPD takes further notice of the claw-murderer.

“Terrible Savior”—As if to reflect Catherine’s repressed fears of Vincent’s beastly nature, a mysterious vigilante begins haunting the subways, clawing evildoers to death. Since only one suspect is presented, the true killer’s identity is not hard to guess.

“Siege”—This time Vincent, not Catherine, initiates the do-gooder action, as he intervenes to repel ruthless thugs attempting to eject residents from rent-controlled apartments. During this episode Catherine meets recurring character Elliot Burch, a handsome millionaire, and is drawn by his charms, incurring Vincent’s resentment. However, the possibility that Burch may have criminal ties cools Catherine’s ardor.

“No Way Down”—Vincent is wounded and hunted by a street-gang and can’t reach any of the vantage points to return to the Tunnels. Catherine seeks to help him, as does another young woman, despite being initially horrified by Vincent’s beast-visage.

“Masques”—On Halloween Vincent can walk the streets of New York with impunity, and so he shows up at a party feting an Irish writer whose work he admires. By coincidence Catherine becomes aware that violent Fenians are planning to assassinate the writer.

“Beast Within”—One of the inhabitants of the World Below, a cherished childhood friend to Vincent, deserts the cooperative in order to work for a mob boss. When the traitor leads a gang into the Tunnels, Vincent is forced to take extreme steps.

*“Nor Iron Bars a Cage”—Catherine is offered a more prestigious job that would take her out of New York City; a rough translation of the fairy-tale motif in which the Beauty temporarily deserts her Beast. Catherine still loves Vincent but feels the need to take some precipitate action, so she accepts the job. Vincent refuses to reveal his torment to her, but his emotions make him careless. He’s spotted in the world above by Hughes and Gould, two university scientists who use trank guns to subdue and capture the beast-man. Both men are hoping to use Vincent to boost their academic fame, but Hughes becomes distraught when he realizes Vincent is an intelligent humanoid. Father approaches Catherine when Vincent is missed, and as she goes looking for him, she realizes that her feelings for him transcend any mundane advancement goals. She finds Hughes and almost convinces him to release his captive, but the obsessed Gould turns violent, resulting both in his death and that of Hughes. The intense dialogue between Hughes and Vincent—who refuses to speak in front of Gould because he senses Gould wouldn’t give a damn—is some of the best in the series, as is the choice of a quote from Wordsworth to round out the episode.

“Song of Orpheus”—Father, whose former life aboveground is a mystery to Vincent, makes the Orpheus-like journey from the underworld, seeking to learn the fate of an aged “Eurydice,” who turns out to be his former wife from an annulled marriage. But a schemer seeking to control the old woman’s wealth kills off her lawyer, and Father is charged with the crime. Vincent and Catherine expose the real killer. Father’s real name is revealed to be “Jacob Wells,” which is a clever play upon an archaic association between wells and the Biblical patriarch.

“Dark Spirit”—Catherine investigates a voodoo curse that apparently slays an accused murderer. The priest behind the curse then places a similar curse on Catherine, and though he uses a psychedelic drug to inflict horrific visions on the Beauty, there’s some suggestion that the priest too may be working with “psychic magic.” Catherine is so filled with fear that she even sees Vincent as a demon, but Vincent gets even when he finds the malevolent mystic—who dies in a fire in the belief that Vincent really is a voodoo loa. Tunnel-dweller Narcissa (oddly named for the Greek legend) displays what may be precognitive skills.

“A Children’s Story”—Ruthless criminals seek to exploit orphan children in a modern-day “Fagin” operation, and Catherine enlists Vincent’s help to stop the abuse.

“An Impossible Silence”—A young woman from the World Below, deaf but capable of speech, witnesses a murder. Catherine must find a way to get her to testify in court without compromising Vincent’s domain.

“Shades of Grey”—Mouse, who supplies much technical know-how for his fellow Tunnelers, is ostracized by them for stealing things from the upper world. Then both Father and Vincent are trapped by a cave-in, and Catherine must enlist Mouse to rescue both men. The “shades of grey” may refer to the shady Elliot Burch, whose help Catherine must seek in order to effect a rescue.

“China Moon”—A young Chinese woman has been promised in marriage to the son of a powerful Tong lord, but she loves another man. Her uncle is one of the surface-world “helpers” for the Tunnelers, and so at first Father does not want to intervene to help the aggrieved couple. But the spurned lover gets into a fight with the true love and is accidentally killed, so the World Below gives the couple refuge. The Tong leader invades the World Below with a small army, but Vincent stalks them all, killing some while others die by bad fortune.

“The Alchemist”—This episode introduces the series’ first recurring villain, Paracelsus, who was clearly designed as an evil double for Father, given that many of his innovations made the Tunnels’ colonization possible. However, his greed for gold caused him to cast out from the society of outcasts, and now he’s synthesized a new hallucinogenic drug from underground mushrooms, which he sells above-ground. Catherine, investigating the drug trade, finds out that the supplier comes from the World Below and alerts Vincent. When Vincent confronts the villain, Paracelsus uses the hallucinogen on him, causing Vincent to revert to a beast-like mentality. Catherine manages to “tame” the beast, after which Vincent again seeks to levy justice. Paracelsus apparently dies, but not for long. The story’s “alchemist” conceit is not well executed—the villain wants gold coins for his drug, but that’s not much like the alchemist’s stock-in-trade—but actor Tony Jay made a great villain.

“Temptation”—Catherine’s colleague Pete is romanced by a lady lawyer from a firm with whom the D.A.’s office is in conflict. Sure enough, she’s been assigned to undermine Pete by luring him away from prosecuting crimes, and when her attempt fails, her criminal bosses try to frame Pete. While all of this goes on, Vincent ventures into the Crystal Caves to find a gift for the anniversary of his meeting with Catherine. Narcissa is mentioned but not seen.

“Promises of Someday”—Devin, a new employee in Catherine’s office, arouses her suspicions. She soon learns that he’s a former dweller from the World Below, who kept the dwellers’ secret but ceased living among them, preferring to jaunt around the world. Though Devin and Vincent were best friends in youth, Father always treated Devin as if he could do nothing right, thus inculcating Devin’s resentment of “favored son” Vincent. Father belatedly reveals that Devin is his natural son, though Father’s reasons for concealing the relationship seem strained at best. In the end Devin goes back to world-traveling but has put some of his past ghosts to rest.

“Down to a Sunless Sea”—Despite the title’s invocation of Coleridge and the reading of some lines from “Kubla Khan,” the episode is a dull “deranged killer” tale. Catherine re-connects with Steven, a former boyfriend, but though he no longer means anything to her, Steven has other ideas. Vincent has some uneasy premonitions about Steven that don’t stem from jealousy, but not until Steven reveals his plans for Catherine does Beast race to the side of Beauty.

“Fever”—Mouse unearths a buried ship full of priceless treasures from a cavern, and many of the dwellers begin to remember the feverish allure of easy money. Even as the Tunnel-people fall out over the treasure, one of their number, Cullen, absconds with a jeweled prize and tries to sell it to an unscrupulous dealer. The dealer forces Cullen to take him into the World Below, but with Vincent’s help Cullen turns the tables, and the thief plunges into a mysterious abyss compared to Hell.

“Everything is Everything”—After a charming gypsy boy steals Catherine’s wallet, she becomes involved in helping him prove his father’s innocence of a crime that caused the boy to become an outcast.

*“Ozymandias”—The title refers to Elliot Burch, who has invested heavily in a new building-project. Some activists think it’s just gentrification that will hurt the poor, but Catherine knows that if the project is completed it will expose the World Below. Elliot proposes to Catherine. Though she does not love him, Catherine considers accepting his proposal in exchange for his cancelling the project. Vincent’s heart is torn asunder not just at the prospect of losing Catherine but also at her entering a loveless marriage. Fortunately for the heroine, Elliot is so invested in the ego-boost of his project that he won’t accept her terms. Later, Catherine realizes that she dodged a bullet because Elliot was involved in illegal attempts to harass his political opponents. In a rare denouement dependent on Lady Justice rather than lion’s claws, an injunction dooms the building-project, saving the Tunnels and leaving Elliot with nothing—whereupon the Shelley poem “Ozymandias” is read aloud by a narrator to underscore his desolation.

*“A Happy Life”—In a rare episode involving no crime elements, Catherine suddenly becomes woeful for the memory of her mother, who died when Catherine was ten (and who has not been substantially referenced in prior episodes). Catherine becomes so obsessed that she talks to a psychologist, admitting that part of her psychic dilemma is that she cannot be with the man she truly loves. Implicit to the drama is the knowledge that she and Vincent have known one another over a year by this time, and now the impossible love has become more torturous, particularly because she envies the normal life her mother and father had. This is expressed by Catherine’s overt envy of the normal life a college friend has with her husband and child. For the first time Catherine considers deserting the normal world for the Tunnels, proposing that she join Vincent in the World Below, if only on a trial basis. Vincent nobly refuses her notion, claiming he knows she can’t really leave the normal world. Catherine takes a leave from her job and joins her college friend for an extended visit—but in a tear-jerking finale, she realizes that she wants Vincent more than normalcy. The conclusion still leaves the love in its impossible configuration, though.

Posted by Gene Phillips at 11:16 AM
Email ThisBlogThis!Share to TwitterShare to FacebookShare to Pinterest
Labels: combative dramas, the marvelous