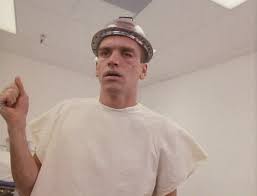 Monte Hellman both directed and co-wrote the third film in the SILENT NIGHT series-- as well as the last one to specifically build on the exploits of the "Santa Claus Killers." Since Hellman had gained a measure for making some offbeat films by that time, particularly two "acid westerns" with Jack Nicholson, one might have thought that his creative input might have revitalized the series.

Well, WATCH is certainly more watchable than the second installment in the series, and it does take the series in a new direction, though it mostly abandons the whole idea of a "Saint Nick slasher." But the direction is not so much innovative as odd, and serial killer Ricky Chapman is changed into a Frankensteinian hulk who walks around with a colander on his head.

The viewpoint character is Laura Anderson, a blind clairvoyant girl being tested for her psychic skills by a university psych, one Newbury. Somehow Newbury not only runs a psychic research program, he also has unfettered access to Ricky, who has been in a coma for six years and has a transparent dome fitted onto his skull, apparently so that doctors can come back and work on his damaged brain whenever they feel like it. In addition, Newbury gets the notion that the best way to test Laura's powers is to see if she can form a mental linkage with Ricky. How any scientist would verify his findings in such an experiment is not a question anyone asks. I suspect that Hellman might have watched a few giallos in which female victims are strangely linked to serial murderers, but that's probably not provable at this late date.

So Laura makes a psychic connection with Ricky, and then goes her way, joining her brother Chris for a trip to visit their grandmother for Christmas. To Laura's consternation, Chris brings along his new girlfriend Jerri, a flight attendant, and even though Laura can't see Jerri it's "hate at first sight" as Laura tosses some catty remarks at Chris's new squeeze. However, around the same time Ricky comes out of his coma, just in time to beheld a drunken guy playing Santa in his room. This triggers Ricky's anti-Santa psychosis, so he kills the guy and goes in search of the girl with whom he shares the psychic link. Newbury alerts the cops and guides a sardonic detective (top billed Robert Culp) to follow the trail to Grandma's.

WATCH is a well-shot but unexciting film that made me long for the simple trashiness of the original. Not much happens until Ricky shows up at Grandma's house, and even when the killings begin, they lack any vigor, even when Ricky hangs the grandmother. (He also kills Chris's girlfriend, which made me wonder if Hellman might have also seen THE BOOGEY MAN, which also involved some possible sibling conflicts.) The most frustrating thing about the climax is that Grandma's spirit appears to Laura and tells her she can prevail if she calls upon her psychic powers. However, in the final struggle, Blind Laura just gets lucky by stabbing Ricky to death. If Grandma had read the script, she could have saved herself a trip.

Wikipedia's summary of the film claims that at the very end Laura has a "vision" of Ricky coming back from the dead and breaking the fourth wall to wish moviegoers Happy New Year. The image of Ricky (in a tuxedo as well as his colander headpiece, no less) does address moviegoers, but there's no connection with anything Laura experiences.

After this, the next two SILENT NIGHTS were "sequels-in-franchise-name-only."

Posted by Gene Phillips at 2:22 PM
Email ThisBlogThis!Share to TwitterShare to FacebookShare to Pinterest
Labels: the marvelous