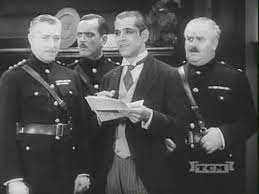 This early talkie is so statically filmed (by actor Lionel Barrymore, taking over from original assigned director Rupert "Phantom of the Opera" Julian) that I might've believed it was taken from some staid stage play. Instead, UNHOLY NIGHT was based on a short story by Ben Hecht, who would certainly craft many better known stories over his next thirty-plus years as a Hollywood scripter.

The mystery gets a strong start, opening as a man is attacked in a dense London fog by a strangler. The man, Lord Montague (Roland Young), manages to escape, and when the police interview him they tell him that he's one of the few recent persons that the strangler didn't kill. The police let some of the names of earlier victims slip, and Montague recognizes that they're all former members of his regiment when it was stationed in Gallipoli. As it happens, the other members of the regiment are due to ring in the New Year at Montague's, and Scotland Yard attends the ceremony in hopes of finding out if the murderer will attend too.

After that opening, though, the film bogs down in lots of expository scenes. Two unexpected guests show up. One is Lady Cavender, an attractive young woman who just happens to be the daughter of a former regimental soldier who was executed for cheating at cards (not really, but the clumsy dialogue makes it sound like that). The other is Abdul (Boris Karloff), a Middle Eastern solicitor with a ghastly "where's that from" accent. Abdul reads the will of the late Cavender, who has left all the surviving members of the regiment a bequest, though each one will inherit more should any of the others pop off this mortal coil. In addition, Lady Cavender seems set on sowing dissension "in the ranks," as it were.

The murderer does strike again, and after some more victims die, he's revealed as the victim of a hypnotic spell by the true villain. A few lines of dialogue state that he might have dressed up like a "green ghost," but the viewer never sees this, just lots of talking heads.

The only sources of entertainment here are Roland Young's comic stylings of the alcohol-loving Lord Montague and Karloff's terrible Eastern accent-- all the more remarkable in light of the very restrained voice he assumes for Ardath Bey in 1932's THE MUMMY. Karloff also had a small part in another Barrymore directorial work, THE SEA BAT, and had a much better role in a more well-known Hecht script for the original SCARFACE.

Posted by Gene Phillips at 1:35 PM
Email ThisBlogThis!Share to TwitterShare to FacebookShare to Pinterest
Labels: enthralling hypnotism and illusionism (u), phantasmal figurations (u), the uncanny