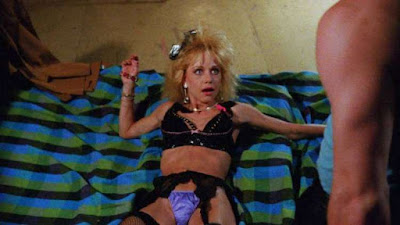 The only thing that caused me to re-watch these lame soft-headed, softcore comedies-- the only ones in the six-film series to star cult favorite Linnea Quigley-- was to see whether or not either one could be deemed combative comedies. Now that I know that they are not, there's not a lot more one can say about them. 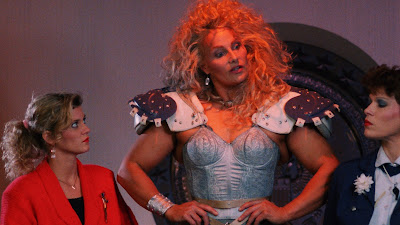 VICE ACADEMY prunes down the ensemble to just the Nice Girl and the Nasty Girl, both reprised by the same actresses, but now both of them are also as dumb as a bag of hammers. Though in theory they've graduated to become officers, they're such screwups that Miss Devonshire keeps trying to steer them into harmless assignments so that they don't make her academy look bad. A super-villain of sorts does introduce herself early in the film; a fiend named Spanish Fly, who doses the whole precinct with aphrodisiac as part of a plan to take over the city.

Since Spanish Fly and her two or three henchwomen are clearly too much for the entire police force, the police chief unveils a secret weapon: a robotic police officer named "Bimbocop" (Teagan Clive). This leads to a lot more forgettable slapstick scenes, and a conclusion in which Bimbocop does bring the villains to heel-- but in such a desultory way that there's no "combat" as such here. There are also various short boob-shots, but the film's best combination of sex and violence-- omitted from screenings on commercial cable-- is one where Quigley and Allen confront a chauvinistic cop in the men's room at the precinct. The guy, garbed only in a towel, tells his buddies that he's slept with both women-- and though both of them did intend to sleep with the cop, they resent the falsification of their affections. Allen's character baits the guy into swinging at her-- causing him to drop the towel and thus get clipped from no-nudity broadcasts-- and she decks him with one good punch. It's probably the only scene in the whole series that works as decent slapstick, and despite the fact that Linnea Quigley continued to make a lot more trashy films, the fact that she dropped out suggests that she didn't think anything nice about VICE.

Posted by Gene Phillips at 2:57 PM
Email ThisBlogThis!Share to TwitterShare to FacebookShare to Pinterest
Labels: diabolical devices (u), outre outfits (u), the marvelous, the uncanny