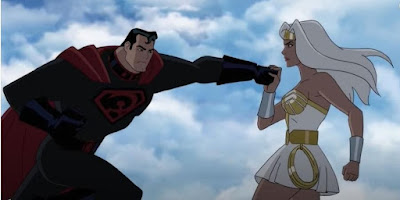 Like 2018's GOTHAM BY GASLIGHT, the video adaptation of Mark Millar's SUPERMAN RED SON (reviewed here) is a great improvement on the source material. Some of the improvements surely arose from the necessity of paring down many of the side-plots of the graphic novel, but others show scripter J.M. De Matteis making conscious choices to revise aspects of Millar's work to achieve different effects, even though much of the original plot is followed. (Since I'm not a big De Matteis fan, I can't help wondering if the strength of his script may stem from his collaboration with director Sam Liu, though I'm sure I'll never know.) Since I discuss some of these changes in detail, SPOILERS apply.

In the late 1940s, Superman's natal ship crashes in Russia, where he's raised by farmers (never seen) and where he has his first and only love, a clear parallel to Smallville's Lana Lang, here given the logical name of "Svetlana." After thirteen-year-old Superman reveals his powers to Lana, she tells him that he should use them to help "the state," then still under the rule of Joseph Stalin.

Ten or so years pass, allowing the young Russian alien to grow to maturity, at which point Stalin shows the whole world how powerful their "red son" is. As in the graphic novel, Superman is too beneficent to help Stalin launch wars of conquest, but his mere existence unsettles the Western democracies. America in particular enlists the aid of super-genius Lex Luthor to find some way to counter the Russian powerhouse in a sort of "superhero arms race." Luthor becomes so consumed with the challenge that he begins to neglect his wife, the ever-spunky reporter Lois Lane.

In Millar's GN, Superman loyally serves Stalin until the Soviet leader passes away of natural causes, at which point Superman assumes the role of premiere. The GN script also included a tedious support-character, an illegitimate son of Stalin who envies the preferential treatment given Superman. The video script dumps the bastard fellow and gives the Man of Steel a sudden and rude awakening to the realities of Soviet brutality. Millar's RED SON was extremely weak in positing that somehow the Kryptonian just never happened to hear about gulags and rigged trials. In contrast, the film has Lois, acting on Luthor's advice, show the alien hero evidence of Stalin's repressive tactics. When Superman confronts Stalin, the dictator attempts to justify his tactics with realpolitik. Superman's response is to execute Stalin with his heat vision and take over Soviet Russia, attempting to redeem the Communist system. The moment in which the hero slays a helpless man will not go over well with viewers who favor a Superman who will never take a life. That said, though the execution-scene jars a bit with the hero's desire to preserve life, it's arguable that the only way Superman could take total control of Russia would be to perform this act of quasi-patricide.

Luthor, with the funding of the U.S. government, manages to create a clone of the super-premier, known as Superior-Man, though by any other name it's clearly Bizarro. Superman defeats his clone in a pitched battle, but Lois is aghast to see that her husband sacrifices the artificial super-being just to gain a psychological advantage.

A fortuitous encounter with the invading alien computer Brainiac gives Superman the technology he needs to control Russian dissidents and to forge the country into a prosperous nation, while much of the rest of the world begins to suffer economically. During this time the hero forges a tentative alliance with Wonder Woman, who considers an alliance between her Amazon nation and the Soviets. However, a Russian version of Batman-- given none of the time-consuming origin-story from the GN--pops up, using technology and vigilante tactics in an attempt to tear down the corrupt Soviet system. Batman is eventually defeated despite getting covert help from Luthor, but the situation creates a rift between Superman and Wonder Woman.

Superman continues to advance the power of Russia, even tearing down the Berlin Wall in a rewrite of the events in the Reagan Era. Luthor fortunately happens across the ship of the dead Green Lantern Abin Sur, and reverse-engineers the crusader's ring so as to create several similar rings, which he gives to a task force that attacks Superman. The fight between the main hero and several Green Lanterns-- including the usual suspects of Jordan, Stewart and Gardner-- is bracing, but the scene in which Wonder Woman interrupts the fight is even better, and in keeping with the Amazon's predilection to oppose masculine brawls for power.

Luthor changes the game by ascending to the office of President of the U.S., which somehow upsets the Soviet rise to prominence. The supposedly re-programmed Brainiac advises Superman to invade America the same way its agents invaded Russia, and Superman agrees-- only to be dissuaded by Lois Lane. In a major revision of the Millar script, this RED SON makes Brainiac the main villain, giving Superman an excuse to step down from his status as the foremost leader of the Communist word. In addition, Lois and Luthor don't divorce as they do in the GN, and the film emphasizes their personal paradise more than Luthor's transformation of the world economy to favor the democracies.

There are still various plot-weaknesses in both GN and video, but on the whole the De Matteis script improves on Millar's weak treatment of Communism. An even greater improvement is the depiction of Wonder Woman. In Millar she's hopelessly in love with Superman, even though he never returns or even notices her affections. The video makes their relationship one of altruism and friendship, and hints broadly that this Amazing Amazon may also be an Amazing Lesbian-- and so deftly that it doesn't feel like the usual "woke virtue signaling." Wonder Woman still suffers for having befriended the Super-Soviet, but here her alienation from him helps the hero realize that he's gone down the wrong path, much for the same reason as Marxism did-- attempting to protect human beings from chaos, and instead resulting in the imposition of an order that stultifies human life.

Posted by Gene Phillips at 2:21 PM
Email ThisBlogThis!Share to TwitterShare to FacebookShare to Pinterest
Labels: combative adventures, the marvelous