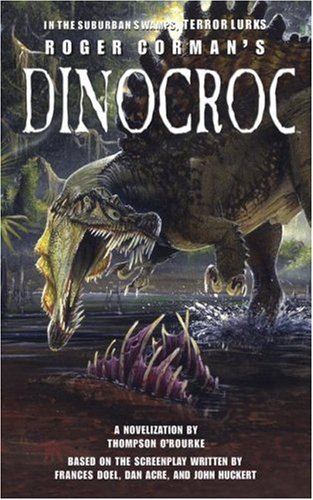 Just for a lark, the illustration I used above is not from the movie per se but from a novelization of the movie. I didn't even think anyone bothered to novelize movies these days.

The saurian crocodile of the title is of course another "son of JURASSIC PARK," in which none-too-bright technicians experiment with dino DNA and create two Dinocrocs. Actually, only one monster croc rampages throughout the film; the other one is supposedly killed early in the film, but then shows up on-camera in the last moment of the flick so that it can later appear in DINOCROC VS. SUPERGATOR.

Though DINOCROC is nothing special, I found that director Kevin O'Neill-- whose record for visual effects is longer than his director-credits-- made the most of hand-held cameras to inject a little more immediacy to all of the scenes of people running from the Jurassic Dork. The script's viewpoint character is animal-loving game warden Diane (Jane Longenecker), whose authority is marginalized by her sheriff-daddy (dependable Charles Napier), though her main concern is that Daddy doesn't like her boyfriend. If I understood the dialogue it sounded like he came on to her when she was 15, but no one dwells on this unusual bit of information.

The genetic research facility wants to capture the Dinocroc alive, so it brings in an Aussie croc hunter with the amusing name of "Dick Sydney" (Costas Mandylor, who steals every scene he's in thanks to his outrageous accent). Still, Longenecker's character gives the standard proceedings a little more groundedness, particularly when she butts heads with her dad about how to destroy the dino.

As seen in most of the giant beastie flicks that have usually shown up on the SYFY channel, the Dinocroc is brought low first by an ingenious trap, and then, when it escapes, by Diane's boyfriend leading it into a collision with a train. These are better-than-average big-monster deaths, but the film does not register in the combative mode.

Posted by Gene Phillips at 3:07 PM
Email ThisBlogThis!Share to TwitterShare to FacebookShare to Pinterest
Labels: the marvelous