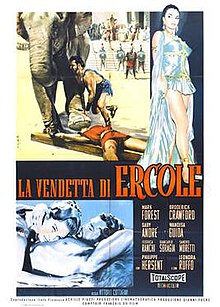 In contrast to many of the films with the name “Hercules” in the title—as this one was in its original Italian release—here the storyline is rooted in many of the well-known tropes of the Hercules mythos. What keeps DRAGON from being a good modern rendering of archaic myths, though, is neither the re-naming of the hero as “Goliath” or the interpolation of a few extra minutes of a special-FX dragon for the English version. The problem is that the script lets the Hercules myth play second fiddle to tedious palace-intrigue plots. Indeed, the character of Eurystheus (Broderick Crawford) could be speaking for critics like me when he says to a minion, “I forbid you to work on any more of these plots that don’t make sense!”

In the corpus of Hercules myths, King Eurystheus of Thebes is intricately woven into the hero’s history. Hera becomes irate that her husband Zeus plans to bestow the kingship of Thebes upon his illegitimate son (whom I’ll call Hercules throughout this review, even in place of the name Goliath). To foil Zeus’s scheme, Hera uses magical chicanery to make sure that a rival heir, Eurystheus, becomes king instead, and in later years, Hercules must report to Eurystheus as his monarch, even reporting to him on the progress of his Twelve Labors, which Hercules undertakes to expiate a previous sin. In DRAGON Eurystheus is still the king of Thebes, but his main concern is to consolidate his power to convincing other local tyrants to join him in a wave of conquest. The script reduces the king’s relationship to Hercules that of a monarch interacting with a lesser lord. This version of Hercules (Mark Forest) lives somewhere near Thebes at a villa where he keeps a contingent of soldiers, as well as his wife Dejanira and their son Hyllus (though the English translation makes Hyllus into Hercules’ brother for some reason).

The scripters (of which there were a dozen) start off the film by loosely duplicating one of the Twelve Labors. As if to avoid the complications of Hercules’ parentage, the hero is said to be the child of “the God of Vengeance” and “the Goddess of the Wind.” So Eurystheus has a minion steal a gem from a temple-statue of his father and deposit the stone in the underworld—possibly to make sure Hercules stays out of his conquest plans. Hercules roughly duplicates the Twelfth Labor, descending into the underworld to fight Cerberus and some bat-demons until he recovers the gem and restores it to the statue. But after completing that ordeal, Hercules pays no attention to Eurystheus and seems content to go back to his regular life. Indeed, Hercules pleads with the image of the father-god to let him enjoy a simple life.

However, trouble is in the offing because Hyllus wants to marry Thea, a local noblewoman. But Eurystheus also wants to marry Thea for political advantage, because she’s the descendant of a royal couple whom Eurystheus had assassinated. Another barrier to true love is that Hercules thinks that Thea’s parents killed his (presumably adoptive) parents, so Hercules doesn’t bless the union either. Complicating things further are two other court-schemers: Alcinoe, sister of Thea, and Ismene, a slave who wants to marry the elderly Eurystheus. Unfortunately, the two female schemers, who more or less take the place of the typical Italian femme fatale, aren’t consistent in their motivations, essentially acting in whatever way the script finds useful.

Alcinoe helps Eurystheus by floating a rumor to Hyllus that his married father actually covets young Thea (an interesting parallel between the hero and his villainous opponent). Alcinoe gives Hyllus a potion meant to kill off Hercules’ supposed affection for Thea, but it’s really a poison. Though this trope is probably swiped from the “Death of Hercules” storyline, in which Dejanira innocently brings about the hero’s demise, here the idea is pretty low-suspense, since the viewer will be sure that Hercules is not going to die halfway through the film. So Thea saves Hercules by sending him a message through the auspices of his mother, the Goddess of the Wind.

Then the scripters toss the Oedipal situation aside to bring up a prophecy stating that someone who loves Hercules will die, and this is thought to be Dejanira. Hercules’ wife is kidnapped by a centaur, much as she is in the “Death of Hercules,” but though Hercules wounds the beast-man with an arrow, the centaur turns the hero’s wife over to Eurystheus, who keeps her prisoner behind the formidable walls of Thebes—all to set up the film’s potential for a big armed battle-scene, such as so many Italian films of the time did.

In the film’s most impressive scene, Hercules returns to his father’s temple and rages against the statue, which possibly reacts by falling down on the hero. The wind-goddess then appears to Hercules, informing him that he can penetrate Thebes by invading the subterranean caves beneath the city. Strangely, the “god of vengeance” then destroys the wind-goddess with lightning, but Hercules reacts not at all to the murder of his supposed mother, zooming off to the caves beneath Thebes. In a memorable sequence, he knocks down a bunch of rock formations while above in the city, Eurystheus gloats over his mastery of the situation.

The final confrontation of Hercules and Eurystheus naturally does not involve combat between the buff Forest and the portly Crawford, but the villain does manage to humble the hero by threatening his beloved wife. However, the prophecy comes to pass, and a woman who loved Hercules does perish—though not the one expected.

I was originally going to leave out the trivia-fact that it's Alcinoe who dies, having conveniently fallen in love with Hercules halfway through the film. However, I decided it was of some interest that this does bring the Oedipal theme back into play, for even though Hyllos' love Thea has no special feelings toward her prospective father-in-law, her sister might be viewed as a doppelganger for Thea. Ismene also seems implicated in this "vengeance of the Dads," since she's in love with Eurystheus, though this plot-thread never comes to anything. Interestingly, though some films of this type are attentive to the real ages of the actors, DRAGON is all over the place. Though Hyllus looks significantly younger than his parents, the actor playing Hyllus was only six years younger than his "father" and four years younger than his "mother." Three of the four main actresses were in their twenties, but Gaby Andre, playing Ismene, was in her forties, which means that she wasn't that far in age from the fifty-something Broderick Crawford, though her real age may have had something to do with why she has so few scenes.