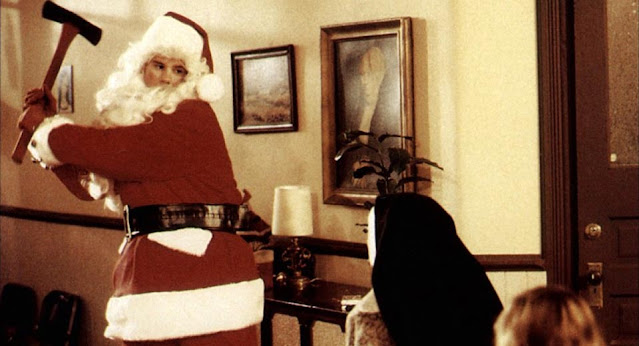 In an earlier review I used SILENT NIGHT DEADLY NIGHT as a benchmark of good basic horror-thrills, in contradistinction to a truly awful Santa-slasher flick, TO ALL A GOODNIGHT. But even if I had not, for some time I've meant to get around to reviewing this perverse little pearl of mayhem.

Before writing this review, I listened to the old YouTube review from Siskel and Ebert in which they pilloried the film, excoriating its makers, such as director Charles E. Sellier Jr., for having made "blood money" off the depiction of a killer Santa. The attitude of the two critics reflected their inability to appreciate the transgressive power of horror, which depends to a great extent on Bad Things Happening to Good People. Clearly for Siskel and Ebert, Santa Claus was an icon of good will, and the idea of using that image to disturb and horrify viewers was mere "exploitation." I agree, but without the "mere." Sellier's film is not only more imaginative than the average slasher in its pursuit of Xmas-themed executions, its portrait of the tragically traumatized killer is, within the limits of the genre, more affecting than most. I find this impressive in part because Sellier usually worked as a producer, only racking up four directorial credits.

At age five Billy Chapman accompanies his mother, father, and baby brother Ricky to a nursing home to pay a Christmas visit to Billy's seemingly catatonic grandpa. While no one else is around, the old man, who sports a bushy beard not unlike Santa's, revives from his apparent stasis long enough to inform Billy that Santa Claus isn't all about presents, but punishment. And maybe Grandpa is psychic. That same night, as the family drives home, a thief costumed in a Santa Claus outfits ambushes their car. The murderous Santa kills Billy's father, and, after trying to rape the mother, slays her as well. Years later, when both Billy and Ricky are being raised in a Catholic orphanage, Billy butts heads with the third member of an unholy trinity of nasty adults: the Mother Superior (Lilyan Chauvin). The script tacitly associates the elderly nun's obsession with ferreting out evil with Santa's omniscience about misbehaving children, and it's from the Mother Superior that Billy gets a complex about the sinfulness of sex.

Ten years later, one of the more beneficent nuns gets the adult Billy (Robert Brian Wilson) a job as a stock-boy in a toy-store. Both Billy's boss and his co-workers are dicks, including to a lesser extent Pamela (Toni Nero), a pretty young thing who occasionally gives Billy the eye but ends up hooking up with Andy, one of the other employees, one who's expressly given Billy trouble. The nasty boss forces Billy to don a Santa-suit to help push toys, but this causes the traumatized youth to identify with his internal image of a "bad Santa." Billy beholds Andy persuade Pamela to make out in a back room, after which Andy gets impatient and tries to rape the young woman. Flashing back to the abuse of his mother, Billy kills Andy, Pamela, showing herself none too intelligent, panics and tries to pummel the armed killer, at which point he kills her as well. The boss and another employee also get knocked off, and Billy wanders off, looking for new victims. Without chronicling all of the kills, the Xmas psycho excels with his murder of a nude young woman (Linnea Quigley), impaling her on the horns of a mounted deer. I'm impressed by the extremes the scripters went to to work a "reindeer" into this Santa's "slayings."

There's no question that Sellier and his co-workers are more interested in playing with lurid images than with delving into Billy's psychology, and the frequent exposures of female flesh certainly would not play with the current generation. But Wilson's performance conveys just the right amount of pathos, and the script keeps up a reasonable amount of tension until the conclusion, which set up the possibility of a sequel even before the box office returns could have been factored in.

All that said, my recollection is that the two sequels (not counting two more DTV films using the franchise-name) are as mediocre as the average slasher. But even though Siskel and Ebert might have hurt the filmmakers a little with negative publicity, SILENT NIGHT has retained a "cult film" prominence in spite of their opprobrium.

Posted by Gene Phillips at 3:08 PM
Email ThisBlogThis!Share to TwitterShare to FacebookShare to Pinterest
Labels: outre outfits (u), perilous psychos (u), the uncanny