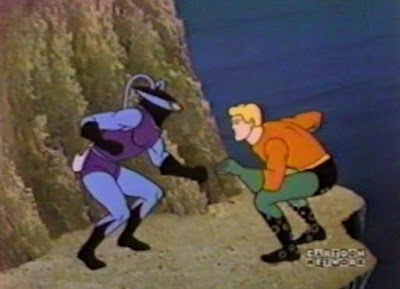 I remarked in this review that I was a little surprised that the packagers of the AQUAMAN cartoon hadn't simply reproduced its eighteen episodes as they first appeared on television screens, with one of the alternating "DC Super Heroes" appearing in between two of the featured character's episodes. But I can see some virtue to the decision, if only because those interstitial cartoons are not as good as the ones with Aquaman. (I suspect that the packagers' main reason for splitting off the ancillary heroes from Aquaman was simply to have two sets of TV shows to sell.)

To be sure, the AQUAMAN cartoons are still just kid's superhero shows, executed with very limited animation. But because most of the characters in the show are seen swimming or lunging around in a watery domain, the show escapes one of the worst failings of limited animation TV programs: the tendency to burn up time having characters walk slowly from place to place or to stand around talking-- which was a frequent failing of Filmation's previous DC-adaptation SUPERMAN, whose rating-success paved the way for a cartoon with the King of the Sea.

By 1966 the AQUAMAN comic book had become less formulaic, and less invested in concluding every adventure by having the hero call up fish to discommode his enemies. The cartoon show, though, doesn't get into any of the melodramatic aspects of the comics-series, and often seems like a pretty close match for the AQUAMAN comics of the fifties, which were all short back-up features. In many ways the cartoons feel like those simple old adventures, albeit with the addition of some sixties-style super-villains and two of the regular Aqua-ensemble characters from that decade, Aqualad (from 1960) and Mera (from 1963). Aqualad, one of the last significant kid-sidekicks introduced in superhero comics, acted pretty much in the comic as he does in the cartoons-- the rash young hero whose chestnuts his older mentor must pull out of the fire. Mera, in contrast to the powerful water-witch of the comics, is just a girl who needs to be saved a lot, which means that she's usually played for laughs. She also comes in for a little sexism. In one episode, Aqualad gets himself into a dicey situation, Mera rescues him, and when the two of them get caught by the villains, Aqualad says it's all her fault they've been imprisoned.

There are three types of AQUAMAN-adventures. One involves some sort of monster getting loose to menace undersea life, and usually the city of Atlantis (always seen as a dome that's supposedly inhabited, though the residents are never seen). Then there are dime-a-dozen alien invaders who encroach upon the Earth, either for conquest or to fight with other aliens-- and most of these E.T.s are fairly stupid-looking, since none of Filmation's character design people could come up with credible aliens, in contrast, say, to the Alex Toth designs seen at Hanna-Barbera's SPACE GHOST. Finally, there are the super-villains, almost always human beings in weird costumes who also frequently target Atlantis with their death-devices.

Next to the relatively graceful deportment of the heroes, the Aquaman rogues' gallery is the cartoon's best aspect. A couple of the foes came from the comics, such as Black Manta and the Fisherman, but a handful of original creations were also enjoyable-- Vassa Queen of the Mermen, the Brain, and the "heavy metal" trio known as the Torpedo, the Claw and Magneto. The writers of the series, some of whom were comics-veterans like Bob Haney, gave the villains a huge arsenal of weird weapons to keep things lively-- though I must admit that the best-named weapons-- sleep gas projectiles cutely dubbed "torpor-pedos"-- are wielded by some of those otherwise forgettable aliens.

The voice-work is exemplary for series-TV, ranging from Marvin Miller (as Aquaman) to those voicing villains like Manta and Torpedo, and actor Ted Knight scored an early animation credit as the show's narrator. I dub the mythos of this series "cosmological" insofar as the writers showed considerable ingenuity finding ways to enlist all sorts of amazing sea-creatures into the hero's crimefighting crusade-- hammerheads, electric rays, octopi, and the like.