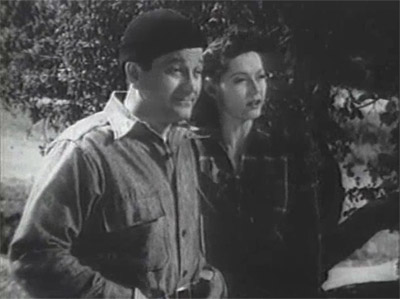 THE GREAT ALASKAN MYSTERY is an amiable spin on the old "good guys and bad guys pursue super-weapon" chestnut. But though it takes place at a time when the United States was still enmeshed in WWII, the serial never really seems set securely in that era. Often the script includes only fleeting allusions to the martial action, as in the first episode, where it's explained that the young hero Jim Hudson (Milburn Stone) isn't currently serving in the military because he was honorably discharged for an injury, albeit one that never interferes with his adventurous activities. But the strangest aspect of ALASKAN is that Hudson and his allies are quite easily infiltrated by a clandestine villain with the very German name of Hauss (Martin Kosleck), and who speaks with a fairly obvious German accent. In some ways, ALASKAN feels something like a throwback to the sort of apolitical serials Universal was producing back in the 1930s.

The super-weapon, given the vaguely Greek sounding name of "the Peratron," is invented by Professor Miller (Ralph Morgan) in order to transmit matter from place to place in aid of the war effort. However, the ray-projector needs a rare form of quartz to power it, and the search for this power-source leads the discharged Hudson-- who's dating Miller's daughter Ruth (Marjorie Weaver)-- to help Miller and Ruth journey to a mine in Alaska where the quartz can be found-- a mine that just happens to be owned and managed by Hudson's father and his aide "Bosun" (the serial's comedy relief, played by renowned comedian Edgar Kennedy). But spies for the Axis try to sabotage the expedition, both on the way to Alaska and after the heroes arrive at their destination. Thus the majority of the serial is devoted to peril in the frozen wastes, as the bad guys keep trying to obtain the Peratron-- which also doubles as a disintegrator ray. In contrast to some more dilatory serials, the evil spies do gain custody of the weapon for the space of a couple of episodes-- though the most bracing scene of physical peril involves a villain setting loose a huge cylindrical log from its bonds, so as to let it roll down and crush two of the good guys.

Though the plot is hoary, the dialogue is a little more naturalistic than in many serials, partly because of the potential familial connections between Hudson, his father, Ruth, and her father. Stone is not quite as dynamic as he proves in his second starring serial, 1945's THE MASTER KEY, but he, Morgan, Kosleck and Kennedy all acquit themselves very well. Of all the main characters, though, I liked Marjorie Weaver's Ruth best, in that she plays a clever heroine with a strong will to help the hero conquer the nasty spies. Her abilities as a pilot put me in mind of the lead heroine from a Universal serial of the 1930s, THE PHANTOM OF THE AIR.