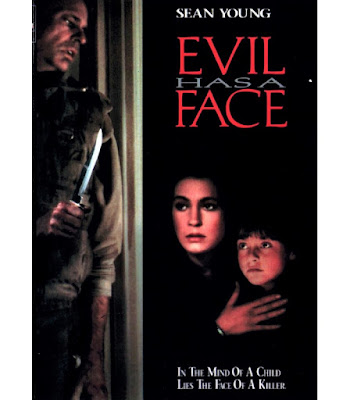 This forgotten telefilm was written and directed by one Rob Fresco, who racked up a lot of TV credits from the nineties on and is apparently still working these days. It's of interest to me first with respect to its place in my NUM theory and second because it offered Sean Young a pretty decent starring role in an efficient if never truly believable thriller.

Gwen McGarrell (Young) works as a police sketch artist in a big city. Gwen conveys little in her interactions with her fellow cops, projecting the attitude of being subtly "haunted." Then her services are requested in a small community called Redmond. Oddly, her Redmond liaison puts her up not in a hotel room, but in an old house where someone committed suicide, so that she's the first to sleep there since the event. This has nothing to do with the main plot, but it's certainly a macabre touch.

A little girl named Bria has recently disappeared, and Gwen accompanies local cops to the child's home to make a sketch of a possible kidnapper from a witness. However, that same day, Bria herself shows up at her home, having escaped her abductor. The viewer soon learns that Bria was molested before getting free, but before one finds that out, she exchanges a "significant glance" with Gwen, even though the two of them haven't even met yet-- which is as close as one can get to depicting a psychic connection without actually going there.

Gwen makes a sketch based on Bria's memories, presents it to the Redmond PD, and then belatedly realizes that she must have made a mistake, because the sketch looks like her own dead stepfather, who molested Gwen as a child before his supposed death. She tries to course-correct, but Bria insists that the face of the dead man belongs to her abductor. The cops try to convince Bria that she was really targeted by a known sex offender, and Fresco does keep the viewer guessing with a better than average red herring.

But guess what? The stepfather never really died, and he's apparently become a serial stalker of little girls (though there's some dialogue suggesting that he followed Gwen to Redmond, which makes even less sense than his resurrection). He still loves Gwen even though she's now a full grown woman, and Gwen must take on the role of a Lifetime heroine to protect Bria and to destroy the spectre who has haunted her life.

I can't claim that EVIL is anything strikingly original. But there are some touches in the music and cinematography departments that elevate this opus above the level of your typically artless Lifetime thriller.

Posted by Gene Phillips at 2:11 PM
Email ThisBlogThis!Share to TwitterShare to FacebookShare to Pinterest
Labels: perilous psychos (n), the naturalistic