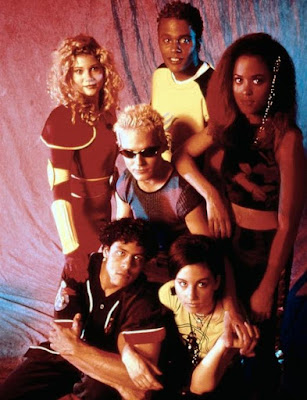 There was a time when Marvel Comics could barely get a decent live-action project off the ground. GENERATION X is one of the many misfires, adapting the same-name comics-series that had only appeared two years previous. Clearly the only reason this telefilm-pilot for a series that was never greenlighted was because someone wanted to see if they could tap into the popularity of the X-comics on a small TV budget. Four years later, of course, Bryan Singer demonstrated that, 1970s TV to the contrary, big-screen features would be the best way to make serious coin off Marvel properties.

For what it is, GENERATION  is at least watchable. The script is necessarily obliged to elide most references to the X-cosmos from which the source comic arose, except that now "Xavier's School for Exceptional Students" (aka "Mutant College") is run by Emma Frost, the White Queen (Finola Hughes). The script also draws on one element from the comics-character's history: that she had previously led another group of super-powered mutants who all died in combat, leaving Frost with a deep desire not to repeat past mistakes. She's aided by Banshee (Jeremy Ratchford), whose history with the school receives no elaboration, As in the comic books, the regular world is quite aware of the existence of mutants, and there's a Mutant Registration Act that enables the government to imprison the superhuman species. This sociological situation appears only in the setup scenes and does not affect the story except to emphasize why Frost's new group of young charges have to keep things on the down-low.

Two of the mutant students are more or less original characters, Buff (Suzanne Davis) and Refrax (Randall Slavin), while the other four are adaptations of such Marvel characters as Jubilee, M, Mondo, and Skin (respectively Heather McComb, Amarilis, Bumper Robinson, and Agustin Rodriguez). The performers all interact reasonably well, not getting along at first but finally bonding in a sense of mutant esprit de corps. None of the character interactions are memorable, though, so I for one have no regrets that these versions of the Gen-X'ers never appeared again.

The weakest link here is the decision to come up with a villain who had a loose connection with Emma Frost, though only in the sense of their being scientific rivals. Somehow the two of them were both involved in dream-research, and while Frost diverges into mutant research instead, her rival Tresh (an over-acting Matt Frewer) figured out how to tap into people's dreams for fun and profit. Not surprisingly, on a TV-movie budget, director Jack Sholder couldn't even come up with visual effects equal to the lesser moments of 1984's DREAMSCAPE.

Not a terrible movie, nor a "pretty good" formula flick, GENERATION X is mostly interesting as a curio.

Posted by Gene Phillips at 4:11 PM
Email ThisBlogThis!Share to TwitterShare to FacebookShare to Pinterest
Labels: combative adventures, the marvelous