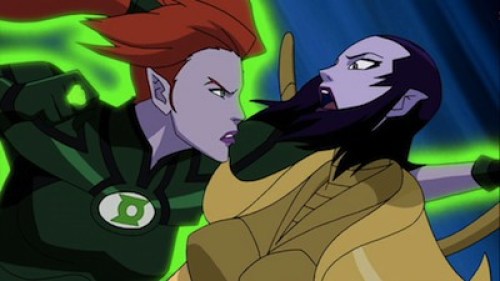 GREEN LANTERN EMERALD KNIGHTS was the second DTV animation of the Green Lantern franchise, and presumably was meant to tie into the release of the 2011 live-action film. While the latter film suffered from trying to introduce too much Green Lantern continuity into a two-hour film, KNIGHTS employs an anthology structure to accomplish the same ends, even though one might argue that by so doing it de-emphasizes the very character, the "Hal Jordan" Green Lantern of Earth, whom the live-action film was trying to sell to audiences.

Some if not all of the stories in the anthology were based on comic-book source-tales, but the credits are not very clear about what appeared in what comic book and when. The framing-device that unites the story is almost certainly original, though. All of the Green Lanterns and their masters the Guardians are under attack by a being from the anti-matter universe, whose name is Krona and who is visually modeled on a character of that name in the comics, though the two have no real history in common. While the cosmic heroes are seeking a solution to their problem, they manage to reflect on other exploits of Lanterns past, after which the frame-story resumes in force and the menace of Krona is predictably dispelled.

The stories are competent but generally also suffer from predictability. One tale is that of the first being to don the Green Lantern ring, but since he's not initially impressive, the moral of the story is "Don't judge by appearances." A narrative focused on the character of Kilowog, who serves as training-master to fledgling Lanterns,  shows how he modeled himself on an even harsher trainer. Two other tales are based on moderately famous Alan Moore stories, but neither is all that impressive as animated efforts.

Only one sequence, "Laira," stands out, focusing on the female hero of the title. A former princess of  the purple-skinned people of Jayd, Laira has chosen to follow the course of administering cosmic justice as a Green Lantern. This brings her into conflict with her father Kentor, who has committed war crimes in order to return Jayd to its former prominence as a planetary power.

While the conflict of father and daughter over politics is an adequate theme in itself, the setup suggests that their struggle may be founded in psychological conflict. Laira's late mother has been replaced in Kentor's bed by another woman, with whom Laira also gets into a bracing battle, and after that, her own brother also attacks her, seeking to remind her of earlier weaknesses. Laira overcomes both opponents and then has an epic fight with Kentor, in which he almost manages to steal her power ring, only to be vanquished, as much by her martial training as by her green power.

KNIGHTS is a good basic overview of the franchise, but arguably the two arcs of the GREEN LANTERN animated series, reviewed here and here, provide more quality control.

Posted by Gene Phillips at 3:39 PM
Email ThisBlogThis!Share to TwitterShare to FacebookShare to Pinterest
Labels: combative adventures, the marvelous