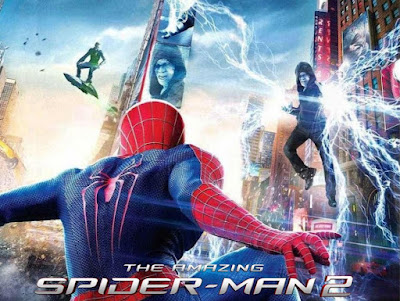 In comparison to the relatively tight structure of the first Spider-flick starring Andrew Garfield, Number 2 makes some of the same "sophomore sequel" errors that have haunted superhero cinema since BATMAN RETURNS in 1992. One theory is that Sony was trying a little too hard to monetize the Spider-Man franchise by spinning off a franchise composed of multiple Spidey-villains, code-named "The Sinister Six" after a short-lived comics-story on a similar theme. With the recent success of the Sony/MCU collaboration on SPIDER-MAN: NO WAY HOME, Sony has started to make noises about another Sinister Six outing-- though I'm dubious as to how interesting these villains would prove without the hero himself in attendance.

I won't quite say that the script-- all by new writers, except for some input from James Vanderbilt-- completely neglects the main character. Peter Parker (Garfield) still has numerous romantic woes with Gwen Stacy (Emma Stone). The first problem is that at the end of the first film, the hero promised Gwen's dying father that Parker would forego seeing Gwen to spare her any danger. But even though Parker has a few upsetting visions of being psychologically "haunted" by the image of Captain Stacy, the romance of Peter and Gwen can't be restrained by a commonplace superego-conflict. Since this problem gets too easily solved, Gwen is also presented with the promise of a new job if she leaves New York-- but a more tragic denouement, roughly lifted from a famous comics-story, will doom this Parker's first love-affair. Aunt May (Sally Field), having lost Uncle Ben in the first film, doesn't get any major arcs here, and J. Jonah Jameson is mentioned but never seen. But the earlier movie's allusions to Norman Osborn, mostly by mentioning his research company "Oscorp," bear fruit.

Possibly in an attempt to distance this series from the Sam Raimi trilogy, Norman himself is first seen as a dying old man who never even comes close to becoming the Green Goblin. But SPIDER 2 also introduces Norman's son Harry, and he's rather quickly turned given an arc-- also one involving a fatal illness-- that will culminate in him becoming this universe's first goblin-themed nemesis. But far more time is devoted to Max Dillon, a nerdy engineer who works at Oscorp, who idolizes Spider-Man, but who soon becomes a new wall-crawler foe when an accident transforms him into Electro.

The changes to Electro's background aren't objectionable, since the original comics-character was always something of a blank slate. Jamie Foxx does a decent job of capturing the electrical menace's shifts of emotion, but there's really not much to distinguish Electro from a million other movie-monsters moaning about their tragic transformations. More tellingly, the plotline involving Harry is rushed, forcing Garfield and Dane DeHaan to attempt selling the audience on their deep friendship with only a handful of scenes. The script's determination to shoehorn other villains as a prelude to a "Sinister Six" concept gets even worse at the climax, wherein Spidey fights a goofy version of The Rhino and a mystery villain is seen bringing together artificial weapons that would have been used for new versions of The Vulture and Doctor Octopus.

Though I enjoyed NO WAY HOME's use of a "Sinister Five" (not including a cameo of Venom), I'm not sanguine about Sony seeking to expand the Spider-villains into their own franchise. The one thing I regret about the termination of the Garfield series is that both of the films had one fresh concept: to expand on the history of Peter Parker's deceased parents. In the comic books, Parker was so focused on his ties to his parental substitutes Aunt May and Uncle Ben that Stan Lee didn't bother saying much of anything about the actual Peter-parents for the first five years of the hero's existence. That led to one comics-story in 1968, and thereafter the Parkers went back into obscurity. But the writers of the Garfield films attempted to implicate the Peter-parents in the research that gave rise to the creation of Spider-Man-- and this might have been a fruitful new path for the series to have pursued.

Posted by Gene Phillips at 2:54 PM
Email ThisBlogThis!Share to TwitterShare to FacebookShare to Pinterest
Labels: combative adventures, the marvelous