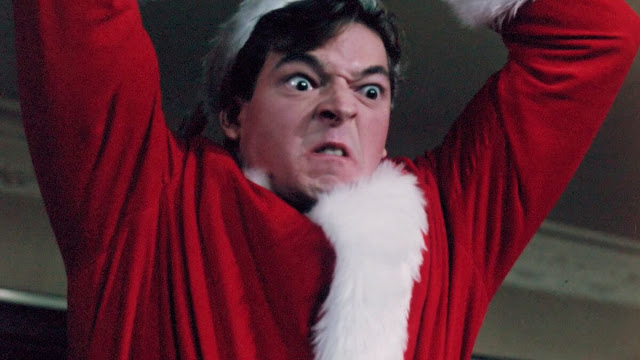 There's no need to spend much time on this shaggy-dog sequel, which plays like a rush-job even though the film was completed and released three years after the first film made all that "blood money" that Siskel and Ebert complained about.

In the annals of rip-off movies, SILENT 2 occupies pride of place, since it recycles 40 minutes of footage from the first film in the form of Ricky Chapman tells a psychologist about the murderous deeds of his older brother. I won't say that the script for SILENT 1 built any new wheels. But at least the psychosis of Billy Chapman, who became traumatized by the image of Santa Claus, made sense within the structure of a slasher film. Here, even though Ricky has shared some though not all of the same background as Billy-- mainly, that of growing up at the same orphanage-- Ricky is just an empty shell, re-enacting Billy's Santa-psycho schtick with no sense of inner trauma-- again, not even by the standards of psycho-flicks. (There's a very minor attempt to give him a semi-slutty girlfriend to give him a sex-negative attitude like the one sported by Billy, but there's no follow-through.)

The Wiki page for the film asserts that the actor playing Ricky, Eric Freeman, was told to ham it up and play the role for laughs. This might be an excuse, since Freeman's performance as Ricky is as bad as Robert Wilson's perf as Billy was good. Or maybe the producers knew that audiences were likely to be irritated by the re-used footage and so they camped things up. And one little part of the film did grab a later audience: when Billy starts knocking off a lot of suburban dwellers in broad daylight with (of all things) a mundane pistol, he yells the phrase "Garbage day!" The scene did nothing for me, but apparently enough people liked it to make it a "meme" for a time.

SILENT 2 is almost a complete waste of time, except for one thing: if you hoped to see the nasty Mother Superior get it in the neck after the conclusion to the first film left her in one piece, the sequel does satisfy in that one minor respect.

Posted by Gene Phillips at 2:38 PM
Email ThisBlogThis!Share to TwitterShare to FacebookShare to Pinterest
Labels: outre outfits (u), perilous psychos (u), the uncanny