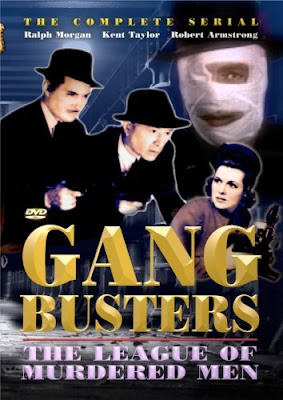 This serial is only loosely derived from the realistic radio serial of the same name, and as one sees in many serials of the period, the gang-busting heroes of this story find themselves opposing a world-beating mad scientist. However, the scheme of the mysterious Professor Mortis (Ralph Morgan) is a good deal more grotesque than the plans of most serial fiends. Mortis commands a gang of criminals he dubs "the League of Murdered Men," whom he claims to be slain gangsters whom he's brought back to life via his science.

Since I've assigned the serial's phenomenality-category as "uncanny," this by itself should give the game away: no dead people were revived in the making of this serial. Nevertheless, until the fake-out is revealed, directors Ray Taylor and Noel Smith get as much visceral impact as possible from the suggestion that the big city is being invaded by undead crooks, forced to obey Mortis because he keeps them alive with his special potions. To be sure, Mortis's schemes are more focused on the city than on the whole world: he claims to have suffered injustice at the hands of the law, and he wants to create terror so that the citizens will kick all of the current administrators to the curb.

There's a fair amount of fast-car and fast-gun action in GANG BUSTERS, but none of the spectacle proved memorable to me. The script's greatest strength is in the handling of the stalwart police detective Bill Bannister (Kent Taylor). Just as Mortis has a grievance against the law, Bannister nurtures one against the world of crime, since one of the hoods working for Mortis took the life of Bannister's brother. Even though the  vengeance-theme is not overly emphasized, Bannister seems to be a little more three-dimensional than the average serial-hero, as he matches his savvy against the mad scientist's diabolical science-- who, as embodied by Morgan, is also slightly sympathetic.

This is a good basic serial, but its only unique element is its use of horror-tropes, even if these are subjected to the so-called "rational explanation."

Posted by Gene Phillips at 3:40 PM
Email ThisBlogThis!Share to TwitterShare to FacebookShare to Pinterest
Labels: combative adventures, phantasmal figurations (u), the uncanny