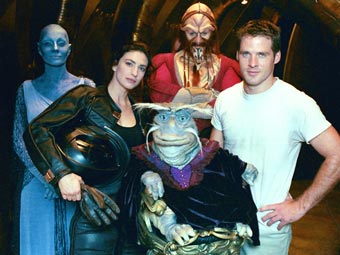 If MARRIED WITH CHILDREN was truly first conceived under the rubric "Not THE COSBY SHOW," FARSCAPE could just as easily been termed "Not STAR TREK."

Though the TREK shows occasionally boasted a few sobering episodes, the dominant mood of the franchise was positive and uplifting. FARSCAPE was certainly not the first SF-teleserial with a cast of regular players that boasted a downbeat or ironic attitude. Both THE PRISONER and BLAKE'S SEVEN come to mind as significant predecessors. But FARSCAPE has the color and verve of a traditional space opera, with so many bizarre extraterrestrial forms that next to it, even the STAR WARS films look-- well, like any of the post-Classic versions of TREK in terms of polymorphous aliens.

In one of his many sardonic observations, viewpoint character John Crichton (Ben Browder) remarks that he has little in common with characters like "Kirk, Spock, Luke, Buck, Flash or even Arthur frelling Dent," comparing himself instead to Dorothy Gale. But a comparison to Lewis Carroll's Alice would seem even more appropriate. Astronaut Crichton ventures into space in an experimental craft, the Farscape (which I doubt ever gets mentioned in later episodes). Alice plunged into Wonderland through a rabbit-hole, while Crichton's craft is sucked into a wormhole, instantly teleporting him into a nether region of the galaxy, where illimitable alien races maintain a space-operatic interplanetary culture.

Crichton enters the new universe with a bang, accidentally crashing into the ship piloted by a "Peacekeeper," a member of a galaxy-spanning security force. The Peacekeeper is slain, but Crichton is taken aboard a Leviathan named "Moya," an organic quasi-cyborg spacecraft, commanded by several fugitives: husky warrior Ka D'argo (Anthony Simcoe), mystic Zhaan (Virginia Hey), imperious dwarf-alien Rygel and the ship's pilot, known only as Pilot. (Both Rygel and Pilot are "played" by Muppet-like figures supplied by the Jim Henson shop, though of course both are voiced by the people working the "strings.")  The fugitives escape their nemesis, other Peacekeeper ships, by using a space-warp, but they accidentally pull one of the Peacekeeper ships along with them. Once they're free of the other Peacekeepers, the fugitives of Moya bring the isolated officer aboard, and find that she's a female name of Aeryn Sun (Claudia Black). More Peacekeepers pursue, commanded by an officer named Crais, whose brother was slain in the accidental collision. Crais is not only set on capturing or destroying the fugitives, he even condemns Aeryn as having been contaminated by contact with the evildoers. Thus Aeryn too becomes a fugitive, with no goal save that of the others: trying to find some way to escape Peacekeeper vengeance in the known universe.

The small crew of Moya have no esprit d'corps at first; they rub each other the wrong way at the best of times, and all of them are particularly irritable with Crichton, the biggest fish out of his own galactic pond. Thus, whenever the characters make planetfall, Crichton gets to be the "dumb guy asking questions," to whom the local aliens can explain all sorts of local customs and biological anomalies. Despite that, though, the fugitives frequently get hoaxed by some planetary culture (an early episode plays like a reprise of Homer's "lotus-eaters" sequence), and not infrequently Crichton helps pull the motley crew together to get all of them out of danger. Halfway through the first season, the crew takes on yet another member: sprightly Chiana (Gigi Edgley), who adds considerable humor to the proceedings.

Crais, though not seen in every episode, is a constant menace, though toward the end of the season the writers introduced a new Peacekeeper menace, an insidious torturer named Scorpius, who eventually replaces Crais as the Face of Corrupt Legality. I didn't think much of Scorpius as a continuing villain, but I'll set that subject aside in case I get to the later episodes.

The element of FARSCAPE most unlike TREK is that one never knows when the fugitives may succor one another, or suddenly turn on one another. In the first season's most memorable episode, "DNA Mad Scientist," a genetics expert offers the crew a biological map that will guide all of them back to their respective homeworlds. But the mad scientist's price for his services is that the fugitives must give him an organ sample from Pilot-- which entails slicing off an arm from a sentient being. Even though the script rationalizes that Pilot's species can swiftly regenerate, it's an unpleasant scene to watch, showing how deeply the crew-members are motivated by self-interest. Yet in another good episode, "A Human Reaction,"  Crichton plunges through another wormhole and ends up on what he initially thinks is his own Earth. In this tale, Aeryn, D'argo and Rygel all come looking for Crichton out of pure altruism, and they're treated badly by the supposed Earthmen before Crichton dopes out that he's not back in Kansas quite yet.

Now, one salient question is, is "Not STAR TREK" as good in its first season as the first year of Kirk and Spock? And the answer is no. It's a fine, engaging show, with a lot of bracing dramatic interplay. But perhaps because of the high cost of makeup and appliances in all episodes, a lot of stories in this season are either "fugitives get hoaxed by alien cultures" or "fugitives turn against one another from some strange influence"-- the latter plot leading to an awful lot of "bottle-shows." On the positive side, the scripts are always strong in articulating the concept of the living ship Moya and its relationship to its Pilot, particularly when Moya conceives an offspring.

Still, even if FARSCAPE might not make my list of "ten best SF- teleserials with a regular cast," it would almost certainly make it into the top 20.

Posted by Gene Phillips at 3:07 PM
Email ThisBlogThis!Share to TwitterShare to FacebookShare to Pinterest
Labels: combative dramas, the marvelous