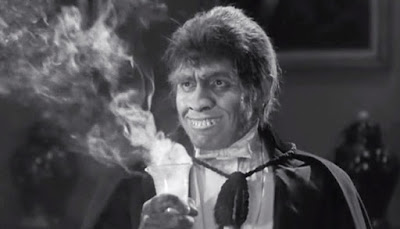 I don't know whether or not Robert Louis Stevenson had, at the time he composed his famous novelette, read Mary Shelley's FRANKENSTEIN. But there's a strong similarity in the motivations of both Frankenstein and Jekyll, who spawn monsters because they share some basic insecurities about their role in society.

By coincidence I read one of Abraham Maslow's works, TOWARD A PSYCHOLOGY OF BEING, around the same time I watched the 1931 film. I wrote:

Shelley's Frankenstein and Stevenson's Jekyll both create their scientific innovations out of what Maslow calls "deficiency motivations;" they become fixated upon some project as if its completion will exemplify their worth. Yet sound cinema's first great version of Jekyll displays the opposite form of motivation, "growth motivation," albeit one that creates the sin of hubris due to the scientist's shattering of psychological barriers.

I speculate that the dominant influence for Rouben Mamoulian's Paramount film was the Thomas Sullivan stage play, which debuted the year after the sensational publication of the Stevenson work. In Sullivan, Jekyll becomes not a misanthrope, but a do-gooder, seeking to find some way to nullify the power of evil within the aspirational ethos of Victorian England, and in this respect the script for HYDE follows the play's model.

For the first half-hour of HYDE, Jekyll , as played by Frederic March in his Oscar winning performance, seems to be the sort of guy who's on top of the world. He's a respected doctor, and though the theories he puts forth in his public lectures are not popular with conservative physicians, no one ridicules Jekyll. Indeed, younger doctors, even if they don't prize Jekyll's theories, go out of their way to watch him rip apart stultified thinking. Jekyll's friends Lanyon and Utterson-- both very loose adaptations of Stevenson characters-- don't know what to make of the man, but what few censures they make of him are mild. The stage play was apparently the first adaptation to give Jekyll a romantic interest-- here, it's his rich fiancee Muriel (Miriam Hopkins)-- but the 1931 film also creates a parallel character, bar-hostess Ivy (Rose Hobart), who appears early in the film, seeking to tempt the righteous doctor into sin.

However, Muriel's conservative father, Danvers Carew, proves to be the one real fly in Jekyll's ointment. While Jekyll and Muriel are eager to be married-- evincing a healthy pre-Code lust for one another, if only in implicit terms-- Danvers sets down the arbitrary notion that he wants them to wait and be married on the same day he Danvers married Muriel's mother. This capricious commandment is never really justified in terms of the rich man's character, but there's little doubt that Mamoulian and his writers conceived that the frustrated scientist then channels his ardor into a quest to eradicate evil. In one lecture Jekyll speaks as if the evil in man's soul can not only be separated from the higher self, it can then be "left to do its will and then be forgotten."

The balance of the film is then devoted to illustrating just how terribly wrong Jekyll is. One may speculate that when the scientist tests his soul-separation potion on himself, he might wish to be rid of the part of his soul that resents the way "heavy father" Danvers keeps him away from Muriel. Instead, Jekyll unleashes what many horror-fans deem the archetypal image of the Evil Self: an ape-like humanoid who looks even more incongruous for being going around London garbed in top hat and evening wear. (Stevenson does use the word "troglodytic" once to describe his version of Hyde, though the literary Hyde is smaller and more repulsive than powerful.)

Even though Jekyll was too much of a man of rectitude to be tempted by Ivy, Hyde remembers the temptation and seeks out the temptress. The scenes between Hyde and Ivy, as he intimidates her into becoming his de facto mistress, suggest a different vein of horror than what most films mine. Mamoulian never shows Hyde brutalize Ivy in the early part of their relationship, but he dominates her with his leering sadism, less like a man-- even an extraordinarily ugly man-- seeking to woo a woman than like a predator fixating on his prey. Ivy, though no masochist, becomes submissive to Hyde's will, only resisting once by seeking out kindly Doctor Jekyll for help-- by which action she dooms herself, since Hyde knows everything Jekyll knows.

However, Hyde's ability to create the illusion of being Jekyll's confidante soon falls apart when Lanyon holds Hyde at gunpoint for information on the missing physician. In contrast to the novelette, Lanyon gets the distinction of being the only named character in the story who witnesses the transformation in real time, though Lanyon doesn't act upon the knowledge.

Next to the slow torture of Ivy, Hyde's impulsive murder of Danvers Carew is merely a plot-device that functions to move the plot in the direction of Jekyll's own demise. Danvers' death sets the police on Hyde's trail, and though the malefactor jumps about like an ape he's soon gunned down, allowing the constables to witness his final reversion as well. Mamoulian ends the film on the image of a pot boiling over-- which I originally thought of as a metaphor for the Freudian idea of the contained "id." But now I tend to think that the boiling pot symbolizes Jekyll's over-confidence in his own brilliance, the superfluity of his own mastery of science-- all of which is no match for the hidden power of base desires.

Posted by Gene Phillips at 2:14 PM
Email ThisBlogThis!Share to TwitterShare to FacebookShare to Pinterest
Labels: the marvelous