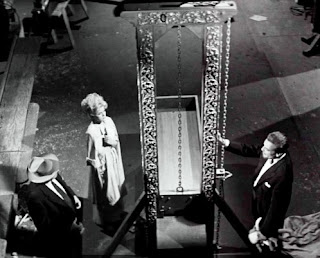 Though I've taken a few shots at William Castle in various reviews, some of his 1960s rivals make him look like Hitchcock. A lot of directors tried their hands at "Gothic shockers" during that decade, and many of them didn't have even a rudimentary sense of how to stage such entertainments.

I don't know if William Conrad directed anything of note in stage or radio, but his IMDB credits tell me that before GUILLOTINE Conrad didn't get behind the camera for anything but episodes of TV serials. After this film his movies both for large and small screens don't strike me as anything very significant, so I suppose GUILLOTINE may have been the actor's first and last shot at the big time. To be fair, the movie's problem lies less with the director than with the screenplay, taken from a Henry Slesar prose story I've not read. In essence, the script reads like an attempt to do one of William Castle's Vincent Price potboilers, but with as little "Vincent Price" as possible.

The "Price" character of GUILLOTINE is master stage-illusionist Duquesne (Cesar Romero). He's first seen fatally stabbing his wife Melinda (Connie Stevens)-- but no, it's just part of an act. Following the performance, the script vaguely sketches the idea of Duquesne as a perfectionist and possible egomaniac, more consumed with his next big trick than with the welfare of his wife and his small child Cassie. The opening suggests some familial tension without giving the viewer any substantive clues, and then finishes up with Duquesne showing off his new acquisition: a trick-guillotine-- demonstrating its deadly-looking illusion on Cassie's doll. (Foreshadowing, anyone?)

Twenty years later, reporters gather at the funeral of Duquesne. Still a showman in death, he's left orders that his coffin should be bound in chains before being committed to the earth, though at the same time he's claimed that he'll come back despite the chains. Not much is said about whatever happened to Melinda, though grown-up Cassie (also Stevens) attends the funeral, and viewers eventually learn that she was raised by other hands, and that Melinda is missing and presumed dead. Cassie finds out that the father she barely knew left her the sort of bequest familiar from many "old dark house" movies: she must reside for seven days in the family mansion before she inherits. However, though Cassie is hounded by reporters, one of them, Val (Dean Jones), insinuates himself into her life without telling her of his profession.

It's at this point that the script starts spinning its wheels. Cassie and Val explore the house, finding it full of Duquesne's old stage-gimmicks. One of Duquesne's old associates, formerly baby Cassie's caregiver, comes back into her life, but the movie soon finds itself alternating between dull romantic interludes between two leads with little chemistry and predictable jump-scares in the old house (one of which takes place in Cassie's dream).

Eventually GUILLOTINE trundles to its predictable climax, which is nevertheless the only scene that partly redeems the film-- and then, only because of Cesar Romero's bravura performance. The old caregiver is around at this point, finally deciding to come clean about how Duquesne tried his guillotine-trick on Melinda, accidentally killed her, and so went crazy. Nevertheless, he conveniently waited twenty years before faking his death and luring Cassie to the manse, apparently wanting to get the trick right this time, and somehow believing that Cassie is the same as Melinda. There's a fight, the guillotine comes down. This must have been enough action to satisfy audiences, since Conrad got a seven-picture deal out of GUILLOTINE. But on balance the only good thing that came of the movie is that Romero's portrait of a crazy man might have encouraged the producers of the 1966 BATMAN series to tap the actor for the role of the Joker. 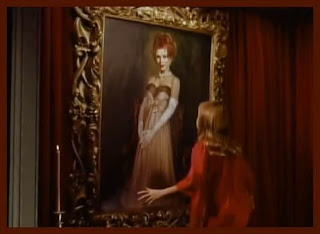 Bert I' Gordon's entry into the the Gothic-shocker subgenre PICTURE MOMMY DEAD is dull and repetitious as well, and barely works out its psychological tropes any better than GUILLOTINE. In addition, MOMMY is a pretty blatant attempt to promote his daughter Susan Gordon to stardom, despite her rather limited talents as an actor. However, MOMMY provides a lot of vivid color photography, with decided emphasis on blood reds, and the movie gets good mileage out of its cast of familiar Hollywood faces.

Like GUILLOTINE, this flick also has a complicated backstory, though MOMMY starts out in real time, with Susan Shelley (Gordon) getting out of an asylum after seven years. Susan had a breakdown because her mother Jessica died in a terrible fire at the Shelley mansion, but now Susan is theoretically cured. She's looking forward to being reunited with her beloved father Edward (Don Ameche), but she receives an unpleasant shock when dear old dad brings along his new wife Francene (Martha Hyer), Edward's former assistant back when Jessica was still alive. Electra-complex issues are immediately suggested. Does young Susan really want to keep Daddy to herself? Did she bring about the supposedly accidental death of Jessica years ago, and will she now kill Francene to satisfy her obsessions?

When the trio arrive at the Shelley's rebuilt mansion, a final main character makes it a dysfunctional foursome: the caretaker Anthony (Maxwell Reed). It's vaguely suggested that he's a cousin to Susan on her mother's side, but the script does little with this element. More importantly, Anthony was around for the fire that killed Jessica, and he was burned by his futile attempt to save her (though the makeup doesn't suggest very strong scarring). With all this exposition, the four of them traipse around the lush mansion, very slowly dropping clues as to the secrets behind Jessica's death. It's still pretty slow going, but a few melodramatic moments and one gory killing spark some interest. The big reveal about Jessica (played very briefly in flashbacks by Zsa Zsa Gabor) proves a letdown, and though I will note here that Susan is not the killer, I tend to view her as the central character. To be sure, she doesn't do a hell of a lot in the film, but she's loosely comparable to the character of Janet in Jimmy Sangster's NIGHTMARE: someone whose psychology informs everything else the other characters do.

Posted by Gene Phillips at 3:53 PM
Email ThisBlogThis!Share to TwitterShare to FacebookShare to Pinterest
Labels: bizarre crimes and crimefighting (u), perilous psychos (u), phantasmal figurations (u), the uncanny