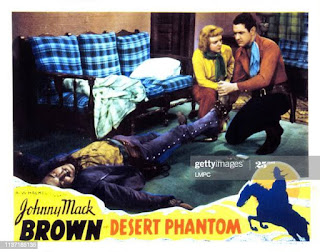 Following the muse of completism as always, I screened these two oaters, both ostensibly remakes of the 1932 NIGHT RIDER.

In my review of the Harry Carey production I mentioned that the Night Rider was just an outlaw dressed in black, who made no pretense about being a ghost. In DESERT PHANTOM, the masked outlaw is frequently called a "ghost"  or a "phantom," though I didn't notice that the villain had taken any special pains to make himself seem spectral. He's trying to force a pretty young girl to sell her ranch by pot-shotting her ranch-hands, in contrast to the 1932 outlaw, who was just a bandit.

The hero here is Billy Donovan (Johnny Mack Brown), not a traveling marshal like Carey but a man looking to avenge his sister's murder. Whereas Carey's marshal masqueraded as an outlaw to find his quarry, Donovan pretends to a dude trick-shot artist, impressing all the folks in town, especially the pretty young thing, who invites him to be her bodyguard. The dude outfit is tossed aside for more manly attire, but Brown's scenes in foppish garb are the film's highlight.

In place of NIGHT RIDER's comic sidekicks, PHANTOM builds up a red herring, the girl's crippled stepfather, who may or may not be truly crippled. Eventually the Phantom is rounded up with no great surprises, though for a B-western this one has some nice action-sequences. 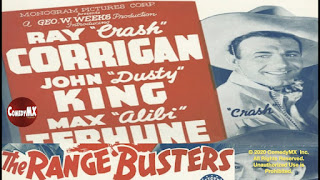 THE RANGE BUSTERS keeps the red herring-- a blind man this time-- and the potshotting masked figure, but though the word "phantom" gets tossed around, there's no consistent sense that anyone thinks he's a ghost. The disguise just barely shunts this flick, the first of a series called "Range Busters," into the realm of the metaphenomenal. This time much more emphasis is placed on the three members of the Range Busters team, who float around solving or avenging crimes for no particular reason. (For some reason the characters all sport, more or less, the same names as the actors.) Of the three westerns based on this script, this is the least interesting.

Posted by Gene Phillips at 3:57 PM
Email ThisBlogThis!Share to TwitterShare to FacebookShare to Pinterest
Labels: outre outfits (u), phantasmal figurations (u), the uncanny