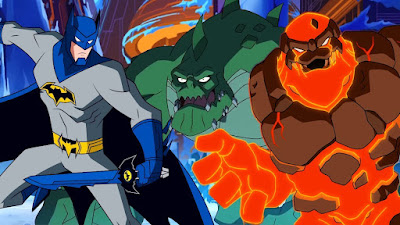 As if to mock me for having given a rating of "fair" to the second of the aesthetically problematic "Batman Unlimited" series of DTV flicks, the last in the series is so bad that even the first one looks pretty good by comparison.

While the other two make ample usage of Batman's coterie of Bat-allies and various guest stars, the script for MECHS devotes only minor attention to superhero guests like Flash and Green Arrow. Although Batman and former-Robin Nightwing appear in MECHS, the dramatic focus, so to speak, is that of Damian Wayne, the current Robin (and altered to a teenager to get around any impropriety for using a preteen hero). Instead of being pleasingly arrogant as the character is in the comics, this Damian is deeply conflicted about his status as Batman's partner because he had a really humiliating experience on patrol. Naturally, by movie's end he redeems himself. Big surprise, right?

The "mutants" of  the title are technically various Bat-villains-- Clayface, Bane, and Killer Croc-- who are mutated in kaiju-sized goliaths (along with, for some reason, the METAL MEN opponent Chemo). The main do-badder responsible for these Amazing Colossal Villains is the saturnine Mister Freeze, who gets the idea of turning Gotham City into a winter wonderland where he can walk around without his imprisoning cold-suit. His plan doesn't go much further than this, much less coming up with strategies to keep the superheroes out of his non-existent hair. For good measure, the Penguin, returned from the ANIMAL INSTINCTS episode, renders Freeze some dubious help, but he's mostly there for comedy relief.

Contrary to the title I believe there's just one "mech," a big Bat-mecha that the Caped Crusader operates against the tedious titans. I like kaiju action as much as the next metaphenomenalist, but the fight-scenes are routine and unmemorable-- like the whole worthless production.

Posted by Gene Phillips at 2:56 PM
Email ThisBlogThis!Share to TwitterShare to FacebookShare to Pinterest
Labels: combative adventures, the marvelous