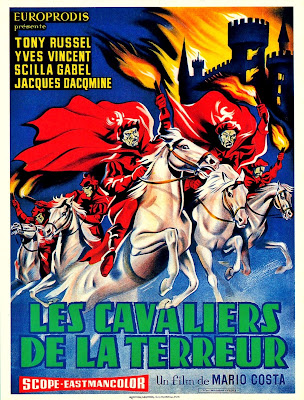 KNIGHTS OF TERROR is a very basic swashbuckler that seems to borrow tropes from both ZORRO and from the "Doctor Syn" novels. Taking place in the 1500s, the setting uses a melange of different character-names, some sounding Spanish (Paolo, Christina) and some East European (Vladimir, Mirko). The titular knights ride around a particular duchy, raiding houses and killing people, and they're so elusive that some people believe that they're ghosts who have taken human form. Like the smugglers from the "Doctor Syn" novels, the riders also wear grotesque masks to further the illusion of their being spirits.

While all this is going on, evil Captain Mirko (Yves Vincent) seeks to force the gorgeous Princess Christine (Scilla Gabel) to marry him. Fortunately for the young woman, a more appealing young man, one Paolo (Tony Russell) comes into the picture, and even meets Christine for the first time in a confessional booth, much as Zorro met his lady-love. Paolo occasionally goes about in a domino mask but when he's unmasked no one, including Mirko, knows who he is. Some of Paolo's allies also wear masks, which reminded me of Zorro's legion of assistants.

The script drops a few broad hints as to who Paolo and his allies are, and the Big Reveal doesn't hold any surprises. There's also no surprise that Mirko is behind the Knights of Terror for some reason, so this time you have two sets of masked swashbucklers in opposition. There are a few good swordfights, and there's good chemistry between Russell and Gabel, but not much else.

Posted by Gene Phillips at 3:23 PM
Email ThisBlogThis!Share to TwitterShare to FacebookShare to Pinterest
Labels: combative adventures, outre outfits (u), phantasmal figurations (u), the uncanny