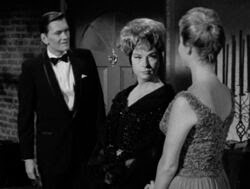 I've mentioned the BEWITCHED teleseries from time to time on THE ARCHETYPAL ARCHIVE, but generally I haven't thought any individual episodes were worth analyzing. Nevertheless, I always thought that there was some mythic potential in the series about a sexy witch trying to live in the mortal world with her husband. Upon re-watching this episode, the fourth one of the first season, I got a sense of the underlying symbolic currents that may have helped the show endure for eight seasons, despite a LOT of very mediocre stories.

The first four episodes essentially set up the parameters for all the succeeding shows. In the first one, Samantha (Elizabeth Montgomery) marries ad-agency copywriter Darrin Stevens (Dick York) without first revealing that she's a witch, with a whole family of witches behind her. Darrin's love allows him to take the revelation in stride, but he insists that from now on Samantha must assume the life of a mortal and refrain from using her magic. Samantha utterly fails to do so in this episode, more or less falling in line with the predictions of her mother Endora (Agnes Moorehead) that Samantha cannot be untrue to her own nature. Endora does not meet Darrin in this episode, or in the next two. The second one introduces the proximate reason for Darrin's injunction against magic, nosy neighbor Mrs. Kravitz, while the third one places Samantha in the first of many conflicts with Darrin's ad agency, when she turns an obnoxious client into a dog.

"What's His Name," the fourth episode, starts the long war between Darrin and his mother-in-law. Samantha pays lip service to doing things in the mortal way, but since she's seen using her powers to make her work around the house more convenient, it's evident that she's very much her mother's daughter. Endora shows up to reiterate that a witch cannot live in the mortal world-- a point reinforced by the presence of more nosy neighbors-- but Samantha tries to win over her mother by inviting her to a dinner party to meet Darrin. Even before meeting Darrin, it's evident that Endora has far fewer scruples about messing with mortals: when she's annoyed by some neighbor-kids, she simply uses a spell to tie them up. It's not impossible to see Endora as symbolizing the willful side of Samantha, the part that really doesn't want to obey her husband-- not least because it does mean the partial erasure of her own identity.

When Darrin and Endora meet that evening, it's mutual hate at first sight. Darrin wants no interactions with Samantha's weird family, and Endora threatens to turn Darrin into an artichoke. This is one of the very few Endora episodes wherein Endora does NOT wreak some magical alteration on her son-in-law's helpless mortal body, and it's probably the first in which Samantha asserts that she can't do anything to cancel the spells of another witch. To the extent that Endora represents Samantha's  own rebelliousness, one might regard this claim as Samantha's tacit consent to tolerate the comical acts of violence her mother perpetrates upon Darrin. Indeed, it occurred to me for the first time that every time Endora or any other witch changes the way Darrin looks or acts, Darrin gets some part of his own identity erased, even as he repeatedly insists that his wife must.

The script for "What's His Name" makes two attempts to disassociate Samantha from Endora. Prior to meeting Endora, Darrin wonders if she's going to be some kind of monster, and also asks if Samantha favors her mother. The witch-wife claims that she favors her father, which is odd given that the character did not appear for six more episodes, and when he did appear, played by Maurice Evans, he didn't look markedly more like Montgomery than Moorehead did. It's in this episode that Endora denies Darrin's identity by continually pretending not to remember his real name. More significantly, after Endora leaves after delivering her dire threats, Samantha attempts to soothe Darrin's ruffled feelings by claiming "you married me, not my mother." Despite that assurance, for the next eight seasons, Endora was the hag who most often rode Darrin's back, despite the introduction of numerous other fractious family-members who upset the ad-man's homey applecart. Clearly the scriptwriters all knew that the trope of conflict between a married man and his mother-in-law had stood the test of time, and so Endora remained the biggest pain in Darrin's ass from first to last.

Most of the show's scripts represented Samantha making spirited defenses of her husband's well-being, but a few played with the notion that Darrin was a toy in the hands of two capricious females. In the first season episode "A Change of Face," Darrin lies napping on the couch. Endora, who claims that Darrin's not handsome enough, alters his facial features. Samantha gets into the game, as if he were a human Mister Potato-Head, and they both wreak changes on his physiognomy until he wakes up and gets mad. In the fourth-season episode episode "If They Never Met," Endora becomes particularly aggressive about playing tricks on Darrin. Samantha convinces Endora to lay off, but by that time Darrin's become so overwrought that he starts a fight with Samantha. He accuses her of being complicit in his tortures: "it's been that way since we got married. You and her, against me, and I'm the one who suffers!" The remainder of the episode steers away from this equivalence though, as Endora intervenes to show Samantha what would have happened to Darrin had the two of them never married. Naturally, the alternate history doesn't do anything to alter the fundamental unity of the young marrieds, but it's the only time that Darrin seems to suspect that Samantha might embody a little more of her mother's defiance than appearances suggest.

The only other potential myth of the overall series pertains to the conflicts between Darrin's job and the unstable universe of magic. Other fantasy-comedies had exploited the tension between a stuffy real-world existence and supernatural weirdness-- notably Thorne Smith's novel TOPPER and its many adaptations-- but the idea of making Darrin an ad-writer had greater potential. On the surface, the ad agency was a respectable business-- but in another sense, Darrin and everyone else at the agency made money by making up charming falsehoods to beguile consumers. Thus Darrin, even while he insists on Samantha's conformity, also works in a profession that practices deception. Thus countless episodes hinged on the idea that one of the witchy spells on Darrin or other characters would endanger one of the agency's accounts, thus putting Darrin's livelihood at risk. In a few episodes, circumstances force Darrin to "speak truth to power," to convince clients to sell their goods based on their real appeal, or to improve the goods to keep up with the times. But the producers of the lightweight series certainly had no interest in overt satire of advertising or anything else, and so most of the content regarding the ad-business is negligible as myth. That said, Endora has become the archetypal image of "the mother-in-law from hell," even though few episodes are as psychologically dense as "What's His Name."

Posted by Gene Phillips at 2:18 PM
Email ThisBlogThis!Share to TwitterShare to FacebookShare to Pinterest
Labels: the marvelous