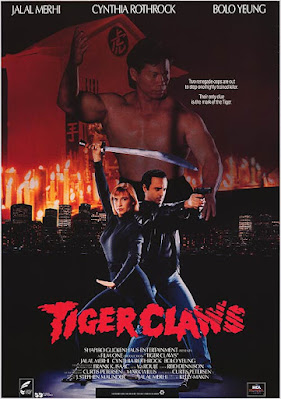 I've certainly seen worse American kung-fu films than TIGER CLAWS-- and in fact, both of its sequels might deserve that honor. The first CLAWS, while it's a very simple action-flick with minor psycho-killer content, is watchable as long as one's expectations aren't too high.

Linda (Cynthia Rothrock) and Tarek (Brazilian-born Jalal Merhi) are cops with martial arts training who suspect that a recent serial killer, nicknamed "the Death Dealer," is the master of "Tiger," a now-obscure Chinese fighting-style. This bit of deduction makes it possible for the two cops to wander around the streets of New York (a.k.a. Toronto) questioning martial artists and getting into fights. It's surprising that these kung-fu cops pull their service revolvers a few times when under attack-- try to find that on an episode of WALKER TEXAS RANGER-- but there should be no doubt that the hand-to-hand combat is the main attraction.

Though the dialogue is banal and both Rothrock and Merhi are tedious, the fights are decent though never exceptional, especially the penny-ante ones that just mark time until the partners contend with the Death Dealer (Bolo Yeung of ENTER THE DRAGON fame). Rothrock's two bouts with Bolo are the most enjoyable, but Merhi-- who had no major film-credits prior to CLAWS-- gets the climactic fight, in part because his character is also supposed to be a master of Tiger style. However, even though the fight is supposed to show how badass Tarek is-- particularly when he's fighting the psycho killer in handcuffs-- the actor projects no real charisma.

Despite Bolo's largely inert performance, the Death Dealer registers as a psycho-killer because he's obsessed with running around killing off martial artists who are embarrassments to the discipline. Possibly because of the actor's language limitations, he never justifies his peculiar murder-pattern, though Tarek throws out a rationale: that he wants to drum up enthusiasm for Tiger in the U.S., where flashy but insubstantial fighting-styles have become dominant. He's kept alive at the movie's conclusion so that he can show up again in the first sequel.

Director Kelly Makin, not an action director by trade, does his best work with a few atmospheric setups for kung-fu duels.

Posted by Gene Phillips at 2:38 PM
Email ThisBlogThis!Share to TwitterShare to FacebookShare to Pinterest
Labels: combative adventures, perilous psychos (u), the uncanny