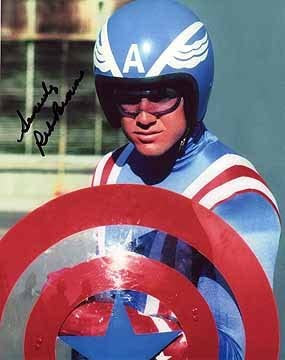 Within the decade of the 1970s, broadcast TV's flurry of enthusiasm for live-action superheroes ended with a whimper when these two CAPTAIN AMERICA pilots debuted in 1979. It's a mark of the cheapness infusing the projects that the second telefilm does not sport the usual reference title, CAPTAIN AMERICA II: DEATH TOO SOON. The producers just flash the same logo-ized title for Number Two that appeared in Number One.

No one will be surprised that these two telefilms fall short of even the modest entertainment-value of the decade's reigning comics-adaptations, 1975's WONDER WOMAN and 1977's INCREDIBLE HULK. But they even make that one-season wonder, 1977's AMAZING SPIDER-MAN, look good by comparison.

Though the second film is marginally better than the first, the producers of both had no clue as to how to translate the appeal of Marvel's Captain America to the small screen. Star Reb Brown makes a tolerable hero, but their decision to keep him on a motorcycle for transportation meant an unappealing re-design of the classic star-spangled costume.

Steve Rogers (Brown) is a traveling commercial artist who comes into contact with spies looking for his late father's biological secrets. They almost kill Rogers, but he's succored by some of his father's former research-colleagues. They reveal that Rogers' father was secretly the WWII Captain America, boosted to Olympic-level strength and physical skill by a serum called FLAG. But the script devotes little time to the original Captain; it's merely an excuse for Rogers to take up the patriotic mantle in modern times. The researchers inject Rogers with the FLAG serum to save his life, and in addition they throw in a semi-transparent, bulletproof shield. In his new costume Rogers corrals the spies-- but I hardly remember what little action there was. Director Rod Holcomb films most of the air-time with tedious exposition scenes of people talking and talking and talking. There's a cute girl on the research-team, but the writers can't even bother to throw in some piddling romance-angle.

Ivan Nagy takes over direction in the sequel, with a few relabeled support characters but essentially the same setup. However, at least this time the new Captain faced a half-decent superhero menace:  mad scientist General Miguel (Christopher Lee), who unleashes an aging-plague upon a small town as a test of his new chemical weapon. Surprisingly, Lee's presence is not the best thing about the telefilm, though, since he simply walks through his insipid dialogue. But there is a half-decent scene in which Rogers is hassled by five small-town toughs, and he proceeds to hand them all their asses. Nagy's direction is not as devoted as Holcomb to seeing if he can make viewers yearn for the charms of drying paint. However, it's still not very good, and I only review the two flicks out of a sense of completism.