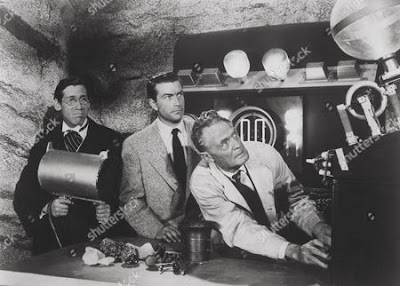 I chose the still above for my review's illustration because it typifies the cramped feel of THE LOST PLANET, one of the last American chapterplays before studios stopped making them in 1956. Whereas the dominant image of serials is one of fast-paced, often relentless action, what one sees most often in PLANET are tweedy scientists turning knobs and flipping switches.

Almost certainly this state of affairs came about because Columbia producer Sam Katzman was seeking to monetize the expenses of the preceding (and technically unrelated) serial CAPTAIN VIDEO by re-using some of that film's costumes and props. The majority of the scenes take place in gadget-filled labs deep in the caves of the villain's refuge Mount Vulcan (mostly sections of the famed Bronson Canyon). Principal character/villain Doctor Ernst Grood (Michael Fox) hardly ever leaves his labs as he plots to turn out weapons with which to rule the world. Some of Grood's agents operate on the far-off planet Ergro, where they force the native people to mine "Cosmonium" to power Grood's weapons. Yet almost all of the scenes on Ergro also take place in offices or in caves. It seems likely that Katzman wanted to keep close to his serial's budget by filming most of the scenes on closed stages, with only a tiny portion of the action transpiring outdoors.

The "action," such as it is, follows the pattern of incrementally more complicated chess-moves. Grood's main enemy is not the stalwart looking reporter Rex Barrow (Judd Holdren) or either of Barrow's allies, a comedy relief and a female lead. Despite Grood's early ranting about how he's created a miraculous metal which allows him to both brainwash people and to turn things invisible, the rogue inventor seems extremely dependent on one Professor Dorn (Forrest Taylor), a scientist Grood has kidnapped to help in his world-conquering projects. Dorn constantly finds ways to undermine Grood's plans, and Grood never retaliates against Dorn in any meaningful way. (It's an amusing bit of symbolism that, even as Grood is identified with "Cosmonium," in that the metal is referenced in many "cosmic this or that" weapons, Dorn has his own miracle-metal, "Dornite"-- though I could never figure out what its properties were supposed to be.)

The three young heroes-- Barrow, his photographer Tim and Ella Dorn, daughter of the professor-- become akin to chess pieces being moved from place to place, whether around Mount Vulcan or on the similar looking environs of Ergro, as they stymie the activities of Grood's agents. Barrow and friends make some apparent allies who turn out to be gangsters seeking to muscle in on Grood's action, but the hoods certainly don't affect the storyline significantly. There are also a couple of other subplots where one Grood-agent tries to usurp another's favored spot, but these developments are handled with the same lack of drama as the exposition of what the Grood-gadgets can do. If PLANET possesses any real entertainment value, it might be that of imagining the tortures endured by the actors, forced to stand around for hours and hours, reciting scientific gobbledegook. The only exception is Michael Fox, who rattles off all the nonsense with as much conviction as if he was reciting Shakespearean passages.

While all the machinations of rival groups may remind one of FLASH GORDON and its political deal-making, PLANET is closer in tone to FLASH's predecessor BUCK ROGERS, whose characters never met a gadget they couldn't discuss at great length. As one might expect, there are a few instances in which director Spencer Bennett tried to inject a little physical action, and some of these are unintentionally funny. In one of these, a gangster is pursued by a "guided missile" that looks like a flaming tumbleweed (and it doesn't even succeed in hitting its target!) One of Grood's minions causes Barrow to flung high in the sky, but somehow he falls to Earth and receives no injuries whatever. In another chapter, Tim and Ella, both under Grood's hypnotic control, aim ray-guns at Barrow and Professor Dorn, but some other scientist blocks the rays so that the two good guys aren't killed. Some of the gadget-happy lines edge into the realm of the ludicrous as well-- like Grood's "Obey me or I'll direct 5000 degrees of solar heat at the girl!"-- but they're few and far between.

Posted by Gene Phillips at 2:47 PM
Email ThisBlogThis!Share to TwitterShare to FacebookShare to Pinterest
Labels: combative adventures, the marvelous