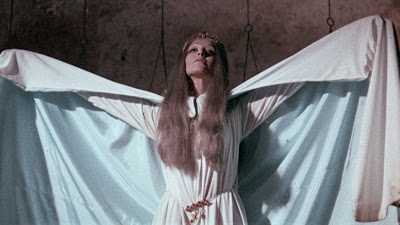 In its original release this vampire flick was issued under the titles CRYPT OF THE LIVING DEAD and HANNAH, QUEEN OF THE VAMPIRES, directed by Julio Salvador with additional footage by American actor-director Ray Danton. I've been told that another version added back some European gore-scenes elided from the 1973 English-language release, and that this version was retitled YOUNG HANNAH, QUEEN OF THE VAMPIRES. That was the title on the TV-print I watched, but since I didn't see that much gore, I think in effect I just saw a version closer to the slow-moving 1973 release-- hence my chosen title.

The movie begins with one of its best scenes. After the script establishes that the titular Hannah, a medieval-princess-turned-vampire, is entombed on a Turkish island, an elderly archaeologist intrudes upon her tomb. He's murdered when some cultists devoted to Hannah cause the sarcophagus-- propped up as part of the archaeological investigation-- to fall on the intruder, crushing him to death. Even before escaping her tomb, Hannah (Teresa Gimpera) chalks up her first death.

The son of the dead archeologist arrives on the island to investigate his father's death. Chris Bolton (Andrew Prine) doesn't credit any rumors of vampirism or vampire cultists, despite the remarks of two other English-speaking residents, writer Peter (Mark Damon) and his sister Mary (Patty Shepard). Mary has become a teacher to the Turkish kids in order to stay close to her brother, whom she seems to regard as needing protection, though from what the script never specifies.

Chris becomes amorous toward Mary, but his main purpose is still to recover his father's body, and that means employing heavy labor to move the sarcophagus. In so doing, the seals containing Hannah are broken. Soon she begins exsanguinating the locals, sometimes in the form of a woman, sometimes in the form of a wolf. Chris takes a long time to get converted, but eventually he spearheads the effort to consign Hannah to the world of the dead.

Not so Peter, who's become a devotee of the vampiress, and who even drugs his sister to make her join his cult. There's an interesting line that suggests that Peter has a bit of a thing for Mary, but his real passion is for Hannah, who even makes him her vamp-slave briefly. However, though Peter is the most interesting character in HANNAH, the script doesn't develop his obsession with the vampire queen.

Technically Hannah is the star of the story, even though she never speaks and is usually seen just flouncing around the island in her white robes. I have no idea as to why Gimpera has no lines, but it contributes to her lack of substantial character-- which could have helped allay the pokiness of Salvador's direction. Only the script's take on vampire mythology gives the film its "fair" mythicity rating here.

Posted by Gene Phillips at 3:23 PM
Email ThisBlogThis!Share to TwitterShare to FacebookShare to Pinterest
Labels: the marvelous