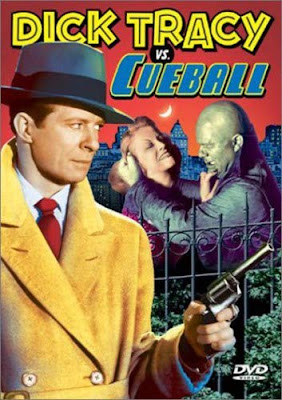 DICK TRACY VS. CUEBALL was the second of four low-budget features released by RKO Pictures. and the last of two films in which actor Morgan Conway played the role. Previous to this, Ralph Byrd had essayed the role in four earlier Republic serials, and he also filled the role in the last two of the RKO films, as well as playing Tracy for one season of a teleseries.

I don't know if the producers of the series knew in advance that this would be Conway's last Tracy performance, but the script almost goes out of its way to minimize the hero's role in the story, in contrast to the first flick, in which Conway is allowed to be relatively dynamic in his battle with the villain Splitface. Here, most of the narrative action is focused on the unremarkable evildoer Cueball (Dick Wessel).

The story is another iteration of the old "gem thief on the lam" trope. Cueball, who has recently been released from prison, somehow acquires a cache of fabulous diamonds. However, one can't spend diamonds, so Cueball has to try to find underworld contacts able to translate the jewels into ready cash. It doesn't help Cueball's situation that he's a hot-tempered thug-- the kind it's hard to buy as a skilled thief-- and that he kills at least one of the contacts able to set up fencing deals. Cueball's usual method is to strangle his victims with a strap, but there's nothing unusual about either his killings or his appearance-- which is why I rate this film as purely naturalistic.

Indeed, the most interesting thing about the film for me is the question, "what data might the script have provided about the villain's hairless state that might have given him some uncanny status?" But as things stand, there's nothing to Cueball except the sense that he may go off at any moment and kill someone. Wessel is okay in the role but the viewer will have seen tough thugs by the bushel, so he doesn't offer much fun. The actors who get the best lines this time out are Anne Jeffreys and Ian Keith as, respectively, Tracy's gutsy girlfriend and corny old actor Vitamin Flintheart.

I am surprised to see on Wikipedia that CUEBALL was cited in 1978 as one of THE FIFTY WORST FILMS OF ALL TIME. Such opprobrium is undeserved. CUEBALL is no better or worse than dozens of other B-pictures, able to dish a little minor diversion but otherwise unmemorable. I suspect the authors of the FIFTY WORST books just seized on this flick at random without making any nuanced judgment.