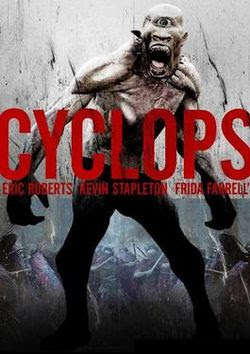 Considering some of the entertainment-free ventures with which Roger Corman has been associated-- the deservedly obscure TERMINATION MAN being a case in point-- one could do worse than "GLADIATOR crossed with KING KONG."

Directed by efficient journeyman Declan O'Brien of SHARKTOPUS and WRONG TURN fame, CYCLOPS is certainly more about intrigues in ancient Rome than about the titular creature. Writer Frances Doel seems just as incurious about the origins of the twelve-foot cannibal humanoid as most of the Romans. This one-eyed monster is, like the original Kong, the last of his kind, and it's broadly implied that he simply came into existence as part of some freakish offshoot from humanity. Not once does any Roman wonder whether this cyclopean creature might have sprung from the loins of some Greco-Roman divinity; they all instantly take the big, inarticulate man-eater as nothing but a human-looking animal.

When the Cyclops starts preying on travelers in the vicinity of Rome, Emperor Tiberius (Eric Roberts) sends military commander Marcus Romulus (Kevin Stapleton) to kill the monster. Instead, Marcus plays a role loosely resembling that of Carl Denham and brings the bound beast-man back to Rome. At that point, Tiberius gets the idea to use the Cyclops to gin up attendance in the arena, as the creature is forced to fight enemies of the Roman empire. Untortunately, Marcus himself becomes an enemy when he asks for largesse that Tiberius isn't willing to bestow. Thus "Denham" and "Kong" become allies against the incarnation of Roman evil.

Despite borrowing a few tropes from KING KONG, the script never once creates any empathy for the Cyclops, and shows more interest in Marcus's travails and his possible romance with a tough barbarian girl (Freida Farrell), The action-scenes are the main attraction here, and they prove at least watchable if not exceptional.