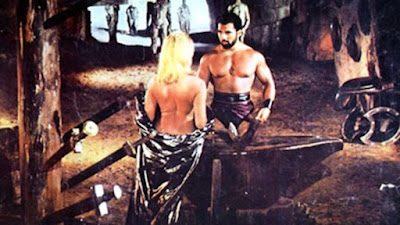 The Graeco-Roman Vulcan/Hephaestus may be one of the least likely divinities to get a movie devoted to his exploits, at least in his original conception as a homely, semi-crippled figure capable of creating formidable magical devices. For this movie, not surprisingly, Vulcan gets a muscular makeover, being played by a beefcake actor billed in various flicks as "Rod Flash Ilush" and "Richard Lloyd" (seen to best effect in HERCULES, SAMSON, AND ULYSSES).

One of the original Vulcan's best-known inventions was a magical net, which he used to trap his faithless wife Venus/Aphrodite when she was doing the deed with Mars/Ares. Clearly this is the Classical story from which Emimmo Salvi's VULCAN loosely derives its idea of a sexual competition between war-god Mars (Roger Browne) and blacksmith-god Vulcan for the hand of the frivolous love-goddess Venus (Annie Gorassini).

Jupiter, the ruler of the Roman pantheon, doesn't like the two alpha males creating chaos in peaceful Olympus, so he strips all three deities of their godly powers and hurls them down to Earth. I should note that I don't  think in real mythology any god ever gets his powers literally removed. They may become diminished through being wounded, which happens to Zeus after his first battle with Typhon. But in movies, a total negation of a god's super-powers is useful when one wants to drop a bunch of actors playing gods down on Earth and have them act like mortals, without lots of expensive special god-effects.

Mars doesn't take this exile lying down. He and Venus make a compact with an army of Thracian mortals to build a tower high enough to invade Olympus, and they make common cause with the death-god Pluto (Gordon Mitchell, who mostly just runs around laughing and talking to the spirit of Discord). This trope sounds at first glance like a bald-faced rip of the Hebrew Tower of Babel, but as it happens there is a related Greek myth, that of Ossa and Pelion, in which two giants attempt to invade Olympus by piling one mountain atop another.

Meanwhile, Vulcan crashes to Earth alone (not unlike a myth in which he gets tossed to Earth, variously by his godly father or his godly mother). The de-powered deity receives succor a group of maidens who seem vaguely related to the nymphs of the sea (which is also in the original myth). There are a few other scenes depicting Vulcan in communion with the sea-god Nepture, though these really have no impact on the story as a whole. One of the maybe-nymphs is Etna (Bella Cortez), a gorgeous woman who at all times talks and acts like a mortal woman, though she's apparently named for the volcanic mountain where Classical Hephaestus kept his forge. Etna follows Vulcan around as he seeks to interfere with Mars' evil scheme and pretty much makes Vulcan forget Venus. (Unhappily, Vulcan also gets a tag-along dwarf-companion who supposedly provides comic relief.)

There's a lot of potential in the movie's premise (co-credited to Salvi), and I rather like the script's notion that somehow Jupiter's power will be drastically reduced if mortals transgress on his domain. Sadly, the plot is ramshackle, comprising lots of scenes with actors rushing aimlessly to and fro, with very few of the expected fight-scenes. The film does offer a nice sampling of familiar peplum-faces with Cortez, Mitchell and Browne, though the star Ilush shows little charisma and so proves the weakest link here. VULCAN bears a minor distinction in being one of the few feature-films in which most of the main characters are deities, given that. in most mythological flicks, such figures are relegated to supporting roles. But the action-level is  so low that even a thoroughly mundane peplum is likely to be more fun.

CORRECTION: On re-viewing a few key scenes, I think Etna and her sisters are supposed to be "daughters of Nepture," as one scene calls them, but for most of the film Etna herself acts like an ordinary mortal woman. Also, in one of the flick's first scenes Venus is also seen dallying with the mortal Adonis. This scene has no real function in the plot, though it could be used to underscore the idea that if she did marry either Mars or Vulcan, she'd probably keep playing around on the side anyway.

Posted by Gene Phillips at 1:34 PM
Email ThisBlogThis!Share to TwitterShare to FacebookShare to Pinterest
Labels: combative adventures, the marvelous