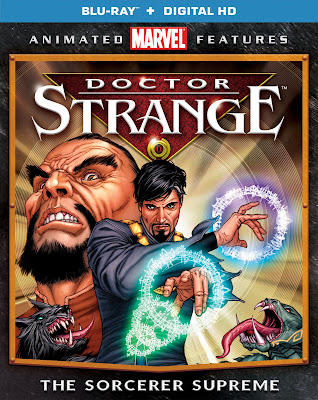 Originally I didn't like this DTV version of the origin of Marvel's sorcerer supreme Doctor Strange. However, when I compare it to the 2016 live-action MCU film-- which I'm going to have force myself to review-- I found myself much more taken with the Greg Johnson-Craig Kyle script.

I think on first viewing I wanted a movie more filled with the exoticism and the vaulting imagination of the original 1960s Lee-Ditko comics feature. However, on reconsideration I have to admit that it would be really tough, half a century later, to duplicate the exotic tropes that Lee and Ditko utilized in Strange's origin, which was rooted in pop-fictional ideas about Tibetan mysticism and cultural attitudes about the divisions between East and West. As for the imaginative aspects of the feature, these were possible in an open-ended series, which usually dealt with the hero venturing into dozens of amorphous realities ruled by nasty sorcerous overlords. A stand-alone DTV flick like this one is limited to "Strange's Greatest Foes," which means yet another team-up of Strange's mortal enemy Baron Mordo and Mordo's extradimensional patron Dormammu.

The original comic implies that Doctor Strange alone serves a lonely vigil protecting mankind from the horrors of otherworldly occult menace. Instead STRANGE starts off by establishing that there's a whole coterie of experienced sorcerers who guard Earth against supernatural creatures, and that all of them-- including future villain Baron Mordo-- are supervised by the mighty Tibetan wizard known as the Ancient One. The other wizards are of diverse nationalities, but the script doesn't run this trope into the ground as the 2016 film did, and even the treatment of the comics-character Wong-- a manservant who gets upgraded to a powerful wizard-- doesn't come off as special pleading. Yet the cabalistic coterie does need to cultivate a Sorcerer Supreme, and Wong is the one who takes notice of Doctor Stephen Strange.

As in the comics-origin, Strange starts out as a brilliant neurosurgeon who cares only about making money-- though the script does ameliorate his selfishness, since he tells his former girlfriend and fellow doctor that without money, the big hospitals couldn't operate. Strange also has a thing against working with children, which later becomes important to the plot, and the writers attempt to make this palatable by showing that he still grieves for his dead sister, whom Strange wasn't able to save on the operating table. This is by far the weakest element in the story, being yet another variation of the "had I but done better" trope that Marvel made famous with that other Lee-Ditko creation, Spider-Man. Mercifully, references to the dead sister are kept to a minimum.

As in the original tale, Strange suffers a vehicular injury so that he can't operate any more, and after reducing himself to poverty looking for cures, he receives a message from Wong, summoning him to Tibet for a possible remedy.

What follows is the backbone of the show, as Strange endures the torturous discipline of a Tibetan monastery and the enmity of Mordo, who senses in Strange a competitor. He thinks he's there for a cure, but the Ancient One, taking his cue from Plato, desires a Sorcerer Supreme who doesn't covet the position, but accepts it as his duty. Strange is ultimately introduced to a magical view of the universe, which suggests that the world of matter can be instantly transformed by the will of a master magician. I won't claim that Johnson and Kyle come up with anything radically innovative in their interpretation of the occult sciences. But these days I often find myself settling for simple lucidity.

The interest level drops a bit as Strange accepts his role in protecting the world from otherworldly villains, specifically that of the magical-energy creature Dormammu, who's using Earth's children as gateways for invasion. But the artists on the DTV come up with a pleasing, more streamlined costume for the hero, and Strange's use of transformation-magic makes for some amusing. On the debit side, neither of the villains have any strong personality, and the only strong symbolic discourse here is the one between the main hero and his ancient tutor. However, that proves to be enough to make DOCTOR STRANGE one of the better efforts from Marvel Animation.