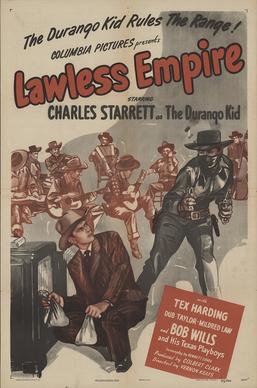 I was considering never bothering to look at the Durango Kid series again, since almost every episode is nearly a duplicate of every other one. However, I happened to check out a Youtube copy of LAWLESS EMPIRE.

In terms of general plot, EMPIRE pulls out what's possibly the favorite chestnut of the B-westerns: a well-dressed, well-educated villain seeks to plunder one or more ranches from their rightful owners, and the hero intervenes to save one or more salt-of-the-earth common folk from the swindlers. EMPIRE doesn't have any new variations on this main theme, but there are a few nice touches. When evil Blaze Howard interviews his next choice for a town marshal-- who is none other than Steve Something, the other identity of the masked Durango Kid-- he shows the candidate a wall-display showing a bunch of badges, guns and holsters taken from previous marshals. I like the idea of an evildoer who blatantly keeps tokens from the lawmen killed by his henchmen, while the villain himself pretends to be a bastion of respectability. Steve Something, not fazed by the display, chooses one of the badges, and accepts his next assignment: to bring in the Durango Kid, who's been hassling Blaze's operations.

The only other touches worth mentioning in the ho-hum plot relate to the way Blaze's henchmen fear the Durango Kid. Often in these toss-offs, Durango comes off as no more than Roy Rogers in a mask, not least because like Rogers, Durango generally manages to corral his owlhoots without taking life. Yet some of Blaze's men have a holy dread of Durango, crediting the masked crusader with having filled a entire "boot hill" with dead outlaws.

During this period grizzled Dub Taylor takes over the duties of comedy relief from Smiley Burnette, and Taylor's a little funnier-- but only just. 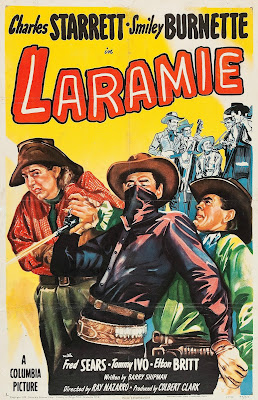 Just today, I decided I would pick another Durango at random-- and sure enough, my earlier antipathy for the series was justified. The town for which the film is named barely has anything to do with the story, since most of the action takes place at an army-fort or out on the prairie. The dimestore plot is all about a bad guy who tries to force the cavalry to attack a peaceful tribe of Indians. Steve Something, who's some sort of government agent in this episode, becomes the Durango Kid and keeps the peace with barely any action to speak of. The only slight interest this oater sustains is that the principal Indian brave is played by Jay Silverheels, roughly a year before he became famous for playing Tonto in the 1949-1957 teleseries.

Posted by Gene Phillips at 1:25 PM
Email ThisBlogThis!Share to TwitterShare to FacebookShare to Pinterest
Labels: combative adventures, outre outfits (u), the uncanny