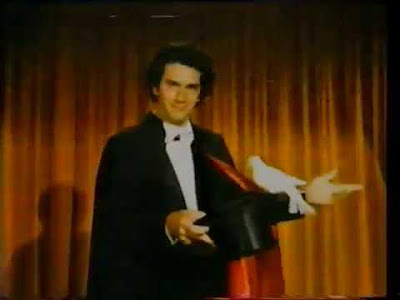 I'd seen the TV-movie MANDRAKE only once, on its original broadcast, and really didn't remember much about it. Thus, when I had the chance to re-screen the flick on Youtube, I wasn't expecting anything more than the two deadly-dull CAPTAIN AMERICA films from around the same period.

To my surprise, even though neither writer Rick Husky nor director Harry Falk (apparently no relation to MANDRAKE-creator Lee Falk) had nothing on their resumes but tons of TV-work, the 1979 pilot is a pleasant little adventure. It has all the budget limitations of any other telefilm of the period, and I don't necessarily think the concept would have made for an outstanding series. But as a one-off take on the classic comic-strip magician, television has done much, much worse.

Naturally, some elements of the original strip had to be changed. The hero's partner Lothar was originally an African prince dressed in lionskins and speaking in pidgin English, so that had to go. The new Lothar (Ju-Ti Cumbuka) speaks coherent English, wears suit-clothes, and claims to be descended from an African royal who competed in the Olympics. That said, he doesn't get into as many skull-busting fights as did the original character, and for the most part his role in the telefilm is unnecessary-- not least because the main hero can do hand-to-hand combat as well as his sidekick.

The early version of Mandrake seemed to be a genuine worker of wonders, but after a few years, Lee Falk provided a new rationalization, that all of the seeming miracles were produced by hypnotic persuasion. The version in the telefilm straddles these two. As a child Mandrake is taken in by a Tibetan magician when his plane crashes in the mountains, and even though Mandrake still produces hypnotic illusions, the plot of MANDRAKE insists that psychic phenomena are real, not just contrivances.

The central plot concerns a missing psychic scientist whose daughter seeks out Mandrake's help. While the comic strip hero and his sidekick simply traveled from place to place helping people, the film's heroes have loose ties to some American intelligence agency, though happily the spy-jinks aspect isn't overdone. Mandrake and Lothar go looking for the missing man, and they encounter people who have been turned into mad bombers by some unidentified villain. Indeed, the best thing about the plot is that, unlike the majority of superhero-pilots, the script doesn't immediately reveal who it is (though for a time, a fellow with the dramatic name of "Arkadian," played by Robert Reed, is a suspect). And when the villain is revealed, it's not your "least likely suspect," though it is a person known to the magician-protagonist.

The pace is decent and reasonably engaging, and Anthony Herrera projects decent heroic charisma. It's far from a definitive adaptation of the character, but it puts across the appeal of Mandrake far better than, say, the serial version MANDRAKE THE MAGICIAN.

Posted by Gene Phillips at 3:02 PM
Email ThisBlogThis!Share to TwitterShare to FacebookShare to Pinterest
Labels: combative adventures, the marvelous