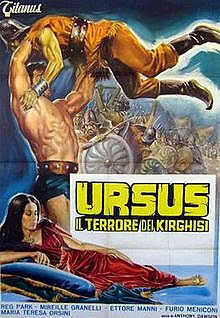 No Hercules here: as the above poster indicates, this was originally an "Ursus" film, roughly the third before the demise of the loose franchise. It takes place somewhere in Central Asia, as suggested by the Turkish tribal name of the Kirghiz. However, the attire of the players suggests the likelihood that the filmmakers were recycling costumes from earlier films, possibly 1961's URSUS AND THE TARTAR PRINCESS, a thoroughly naturalistic film in which Ursus is a supporting character with no unusual strength (which is one reason I won't review that one here).

Whatever the provenance of the costumes, the script seems to have taken everything that was interesting about the story of Ursus's debut adventure and done it wrong. URSUS was a fairly intriguing story of a strongman searching for his lost beloved, while accompanied by a young woman who also loves him. The story, structured rather like a mystery, ends when the hero learns that his beloved is evil and rejects her.

Ursus (Reg Park) is from the beginning in love with lovely Amiko (Mireille Granelli). The hero also hangs out with a local tribe of Kirghiz, one of whom is the slave girl Katya (Maria Teresa Orsini), who's occasionally seen riding a horse like a male tribesman. The Kirghiz are being repeatedly menaced by a mysterious beast that slays cattle and men alike. At the same time, Zeretelli, an evil usurper, schemes to solidify his power base by marrying Amiko, his cousin and a woman with some aristocratic lineage. Zeretelli thus has good reason for wanting Ursus out of the way, but the predator, a wolf-man, gets there first, wounding Ursus with his fangs. The hero's injury puts him out of commission for a time, during which time another support-character tries to rally the Kirghiz to overthrow Zeretelli.

As in URSUS, the big reveal is that Amiko is a witch and the werewolf is her creation, and she even takes command of Ursus when he's turned into a werewolf. Young Katya, whom Ursus doesn't even notice at first, turns out to be an aristocrat of far greater standing than Amiko, and eventually she takes Amiko's place as the hero's romantic partner. Amiko's motives for witchery are left vague and there are only a few decent action-scenes here, partly because Ursus is off screen for so long a time. The film's direction was credited to Antonio Margheretti, but famed horror-helmer Ruggero Deodato claims to have handled most of the directorial duties.