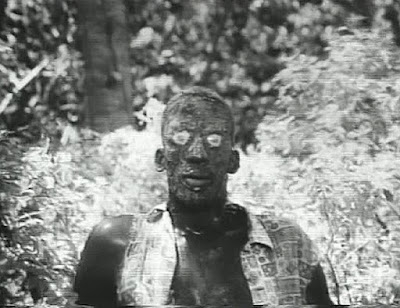 Writer-director Del Tenney might not have made a great deal of impact in the world of sixties B-films, but over the years  searchers after horror have made him something of a legend of "films so bad they're good." This accusation isn't entirely deserved. Tenney is only known for three B's, all directed in quick succession circa 1964: THE CURSE OF THE LIVING CORPSE, THE HORROR OF PARTY BEACH, and ZOMBIE-- the last one so mediocre that it didn't even find a distributor at the time. Years later, packager Jerry Gross dusted off the black-and-white B-film ZOMBIE, retitled it I EAT YOUR SKIN, and successfully released it in a double bill with a 1971 film, I DRINK YOUR BLOOD.

Even in 1964, SKIN-- the last movie Tenney filmed in the sixties-- looks terribly old-fashioned, striving futilely for for the light touch of such Universal B-films as HORROR ISLAND. Tenney starts off by introducing the film's hero Tom Harris (William Joyce) as a successful writer whose favorite avocation is messing around with women. In fact, he's just got mixed up with a married woman with a very jealous husband, so when Tom's publisher offers to send the writer to a Caribbean island for research purposes, Tom's happy to pick up stakes. Publisher Duncan also goes along for the ride, and brings his brassy loudmouth wife Coral as well, possibly with the idea of keeping Tom's nose to the grindstone. All this folderol sounds like it ought to be entertaining, but it comes off as tedious, particularly because most of Tenney's camerawork is stodgy and unimpressive.

One downside of the trip: the island is nicknamed Voodoo Island, and Tom's supposed to research the Caribbean religion for the forthcoming book. Duncan helpfully explains that there's a scientist there, Doctor Biladeau, who's hoping to use the poisonous snakes there for cancer research. Duncan also speaks of armies of walking dead-- "I presume you'd call them zombies"-- and of sacrificial rites. Yet nothing Duncan says sells Tom on the project more than the claim that on Voodoo Island the women outnumber the men five to one (though there's no strong evidence of this in the film proper). At any rate, Duncan charters a flight to the island, but it runs low on fuel and has to make an unscheduled landing on the beach near a jungle.

To Tenney's credit, he doesn't keep the viewer waiting long for his first zombie. Tom goes wandering in the jungle for provisions, and is lucky enough to spy a fetching blonde damsel bathing in a river. Then a zombie, complete with saucer-eyes and raddled skin, pops out of the jungle to menace the girl. Tom rushes to her defense, but somehow loses track of both the girl and the zombie. Minutes later, when Tom seeks out the plane's pilot, the zombie pops up again and attacks them both, proving himself immune to gunfire. A jeep full of armed men appears and drives the zombie off.

The men in the jeep then escort the travelers to the home of Doctor Biladeau, who welcomes them and makes introductions to both his assistant Bentley and his lovely young daughter Janine, who is of course the damsel from the river. Tom and Janine flirt a little, though she warns him that she knows jui-jitsu (another thing never seen in the film). However, though Biladeau claims not to credit rumors of zombie armies, that same evening a small band of saucer-eyed shamblers try to abduct Janine. Biladeau then admits that the local natives have a thing for "blonde virgins" in their sacrificial rites because their African ancestors once had great success killing a blonde woman for their gods. (Note: though Tenney makes up a lot of stuff, and his zombies are basically SF-creations, he does at least use some genuine voodoo-terms, like the name of the African deity Damballah-Wedo.)

After two or three references to "virgins" in the film, it's almost funny when Tom infiltrates Janine's room-- whether out of genuine concern for her feelings, or just to make a conquest, one can't tell. The script doesn't specifically say that Tom deflowers Janine, but later they seem to have become serious about each other, for Tom urges the girl to leave the island with him. Janine will not leave her father, however.

No viewer will be particularly surprised by the revelation that Biladeau has been using his experimental snake venom-- "irradiated" snake venom, no less-- to change living islanders into zombies. How this is supposed to help cancer research, the script does not say, but Tenney does set things up to make it seem as if Biladeau is the prime mover behind the zombie cult. Yet when it's revealed that Bentley is the real mastermind, there's no emotional impact to the desultory revelation. Most of the 'action" is uninvolving, save for a memorable scene in which a zombie holding a box of dynamite destroys the travelers' charter-plane. Still, the good guys escape by boat and Biladeau destroys his whole lab with one of those convenient "blow up everything" devices.

Though I haven't seen Tenney's other two horror-flicks in some time, my memory is that I EAT YOUR SKIN's mediocrity puts it right in the middle between the sheer dopiness of HORROR OF PARTY BEACH and the relative quality of CURSE OF THE LIVING CORPSE. Future re-viewings will determine whether my memories play me false on this.

Posted by Gene Phillips at 1:47 PM
Email ThisBlogThis!Share to TwitterShare to FacebookShare to Pinterest
Labels: the marvelous