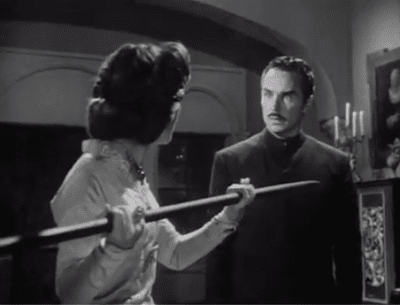 The Spanish director Miguel Morayta gave Mexican cinema what may be its best vampire film, at least in terms of visuals. While many Mexican horror films wear their derivative nature on their sleeves as it were, Morayta, who also co-wrote EL VAMPIRO SANGRIENTA, seems to be striving to come up with a vampire mythology all his own.

To be sure, THE BLOODY VAMPIRE is far from a perfect film, even going by the U.S.-dubbed version. While I enjoyed all of the visuals revolving around the titular bloodsucker, the risibly named Count Von Frankenhausen, Morayta is not so inspired with his fearless vampire hunters. The director seems to burn at least twenty minutes of film time, having the leader, Count Cagliostro (named for the 16th-century adventurer/magician), discuss with his aides all of Morayta's unique takes on vampire mythology. These inventions include the notion that there are both "living" and "dead" vampires, with the dead ones being the only ones who rise from their coffins at night, and that vampires can best be stopped with "clannic acid," a substance taken from the mandragora plant. These talkfests are fascinatingly dull, as are the vampire hunters Cagliostro, his daughter Ines, and her handsome young fiancee Riccardo. Their one good scene takes place at the film's opening, when the hunters observe from hiding the phantom carriage of Frankenhausen, which makes no sound as it travels and is driven by a cassocked skeleton.

None of Morayta's vamp-mythology adds up to much, though we do see the vamp-hunters staking out a tree where a thief has been hanged, in accordance with the legend that in such places the mandragora plant blooms. (The legend also says it's because the plant is fed by the ejaculate of the hanged man, though of course that doesn't make it into this film.) All the best scenes take place at Frankenhausen's castle, and for once, this location doesn't look like it was cobbled together from old Universal movies. Morayta's sets look like a place designed to be lived in, with its own unique decor. 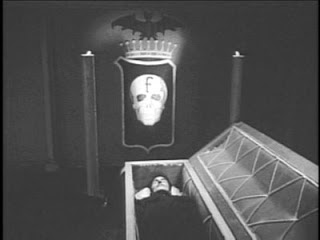 Frankenhausen also has a bit of a REBECCA-like family problem. He's been stalking about, making young women into vampiric consorts (though only one is actually seen). This pisses off his non-vampire wife Eugenia, seen above threatening her husband with a metal spear. Apparently Morayta's vampires can still spawn, since it's said that they have an adult daughter away at school (never seen here, though she figures into the sequel INVASION OF THE VAMPIRES). Eugenia can't do much, though, especially since Frankenhausen has a fanatically loyal servant, Frau Hildegarde (the main reason I invoked REBECCA, with its earlier usage of an obsessed female servant to the lord of the manor).

Eventually the vampire hunters stop talking long enough to go vampire-hunting, and though there are still some slow spots, there's a moderately exciting climax when they force Frankenhausen to go on the run-- which he does, until he pops up again in the aforementioned sequel. I screened the second film some years back, without having seen BLOODY VAMPIRE, so it will be interesting to see if INVASION lives up to the better moments of its first part.

Posted by Gene Phillips at 2:19 PM
Email ThisBlogThis!Share to TwitterShare to FacebookShare to Pinterest
Labels: the marvelous