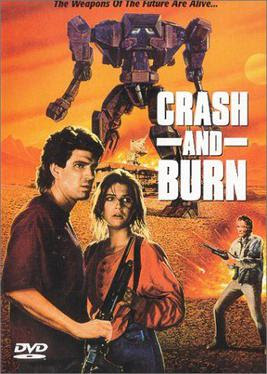 Though CRASH AND BURN was filmed by Empire Pictures in the same year as ROBOT JOX, and was even re-titled ROBOT JOX 2 in some markets, CRASH's use of giant human-driven "mecha" is far less important to its story. Indeed, there's only one such fighting-machine in the whole story.

CRASH takes place in a post-apocalyptic future devastated by economic chaos brought on by computer manipulation. Like most post-apocs, the collapse is an excuse to set the whole film in some barren desert, as short-hand for the loss of societal richness. But whereas many such films have to deal with roving raiders, CRASH's scripter J.S. Cardone concentrates on a counter-revolution against Unicom, an oppressive government, never seen except through its representatives. Perhaps because Unicom gained its power through a computer breakdown, they pre-emptively forbid the surviving human communities to have access to higher mechanism. This means not only computers, but also the huge robot-mecha that used to be commonplace.

The principal hero, Tyson Keen (Paul Ganus), is one such representative. He's sent to deliver goods to an out-of-the-way television station, apparently underwritten by Unicom, even though the crotchety manager Lathan (Ralph Waite) has no problem taking on-air shots against the government and its uncertain battles with the Resistance. Keen doesn't intend to stay, but in the grand tradition of 1948's KEY LARGO, he's forced to remain at the station by an impending "thermal storm." This means that he has to mingle with Lathan, Lathan's spunky teen granddaughter Arren (Megan Ward), an obnoxious TV-host, and an assortment of other functionaries. But then CRASH diverts into the terrain of the "science fiction mystery," as Lathan is slain by someone staying at the station.

Cardone almost certainly borrows a few tropes from John Carpenter's THE THING (who among us is a killer) and from ALIEN (the killer is an android sent by Unicom to do the government's dirty work). Nevertheless, Megan Ward's performance as Arren overcomes many of the generic stumbling-blocks, in that she has boyish traits (she seeks to revive a cast-off mining robot she calls "Dv8") while seeking to deal with her girlish teen crush on the good-looking Tyson.

The film is also enlivened by several strong action-sequences, as Tyson and Arren have to battle Lathan's mechanical killer (cue THE TERMINATOR tropes). Paul Ganus is a little dull, but most of the rest of the cast gives this minor effort their all.