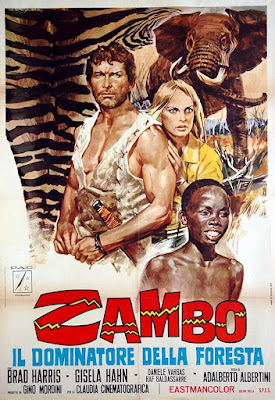 As the U.S. began producing fewer and fewer jungle-adventure flicks in the seventies, various European countries attempted to take up the slack. A few of these are good mindless (if politically incorrect) fun, but ZAMBO LORD OF THE JUNGLE is not one of those.

Though as entertainment ZAMBO is dire indeed, there are a few little sociological curiosities in the film. The first is that main character George Ryon (Brad Harris) is not raised in the jungle; he escapes prison in some civilized country and flees to darkest Africa to hide out from the law. There he's given one of the briefest origins ever seen in the genre: one minute, George has been captured by a tribe of Black Africans who put him in a cage. Then one black child reaches out to him, as if sensing his essential goodness. And then there's a jump in time, and George has taken up living in the jungle while wearing a zebra-skin jacket and trousers. The natives have dubbed him Zambo for some reason, and while many people today would assume it was a reference to the fictional figure Little Black Sambo, I think I heard the natives call themselves something similar to the real-life Zambezi tribe. So that probably informed the name choice. Zambo doesn't have any special skills; he's just a good basic fighter. One little black kid-- presumably not the same one from the cage-scene-- hangs around Zambo all the time talking about how wonderful he is, but the hero doesn't do a helluva lot to justify the hype.

He does get a great reputation for being one with the natives and the jungle beasts, and there's a minor attempt to keep from being condescending, when Zambo tells a European that he prefers the wise, placid life of the tribe over the warlike ways of civilization. Speaking of Europeans, one expedition hears about the fabulous Zambo and seeks him out to he their jungle-guide. The expedition is made up of the usual outsiders: good whites, represented by an elderly scholar and his sexy daughter, and bad whites who are with the expedition to rip off treasure.

The scholar's plan to find a lost city might offer some potential thrills, but the city is long dead and it only provides a treasure for the bad guys to attempt stealing. There's one really curious moment in which the scholar uses a gemstone to focus the sun-rays and to open a long-sealed door, which is an interesting ancestor to a famous scene in "Raiders of the Lost Ark." The guy then enters some forbidden chamber, and when Zambo finds him, the scholar's temporarily lost his mind for some unknown reason. Later the scholar gets his senses back, but if the lost city has some recondite secret, the filmmakers possibly dropped it for being too expensive.

ZAMBO is a pretty cheap production, and Harris's athletics are pretty much the only attraction. Cute blonde Gisela Hahn plays the hot daughter who romances the jungle-man but can't persuade him to return to Europe when the hero is conveniently cleared of all crimes. So there are no real surprises here, except for the fact that the film opens with a Schopenhauer quote in a foreign language I didn't know, probably Italian. That probably makes ZAMBO the only jungle-action film that has ANY kind of philosopher's quote in it.

Posted by Gene Phillips at 3:11 PM
Email ThisBlogThis!Share to TwitterShare to FacebookShare to Pinterest
Labels: combative adventures, outre outfits (u), the uncanny