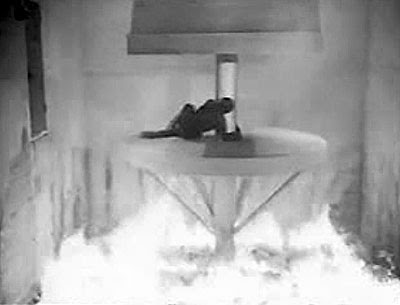 Though celebrated stuntman Dave O'Brien had enjoyed assorted starring roles before CAPTAIN MIDNIGHT-- such as 1936's BLACK COIN-- this serial about the popular radio hero was probably the closest he ever got to "the big time."

Regrettably, even though the first movie version of the hero-- who had also showed up in comics by 1942-- has a pretty striking, all-black outfit, as a character Midnight leaves viewers "in the dark." At the serial's outset the audience is introduced to esteemed aviator Captain Albright, who maintains-- for no clear reason-- the double identity of the masked Captain Midnight. As in the radio serial Midnight has a "ground crew" called the Secret Squadron, who were supposed to be the only one in on the captain's secret ID. But the serial's script can't be bothered to say how Albright took on the ID of Midnight, and for that matter, a lot of people in the course of the serial find out the secret rather easily.

Though the story revolves around a gang of enemy agents seeking to snag a new bomb-sighting invention, very little is said about the war itself, nor is there much in the way of morale-boosting here. Main villains Ivan Shark (James Craven) and his ruthless daughter Fury (Luana Walters) are never directly tied to the Axis, and there aren't even a lot of aerial stunts to play off the hero's aviator status. Its weak plot is fairly typical of many serials, but even some of the mid-range chapterplays bring in better moments of melodramatic characterization. Thus, Midnight is a cipher fighting other ciphers-- albeit with very well-staged fight-scenes. Of all the villains Craven does deliver a spirited "Big Bad" in spite of Shark's shortcomings as a master planner.

The one thing that saves MIDNIGHT from total mediocrity is the death-trap shown above. Shark catches Midnight in a room where the hero is imprisoned on a rotating disc, while a great weight descends from above and flames spout from the floor below. It's such a perfect trap that the script has to have the hero saved when Shark's blundering henchmen accidentally shut off the power in the trap-room. This is one of the many oddball-humor asides that director James W. Horne brought to many of his serial efforts, and while contrived, they're preferable to the antics of the two goofball members of the Secret Squadron.

Posted by Gene Phillips at 3:41 PM
Email ThisBlogThis!Share to TwitterShare to FacebookShare to Pinterest
Labels: combative adventures, diabolical devices (u), outre outfits (u), the uncanny