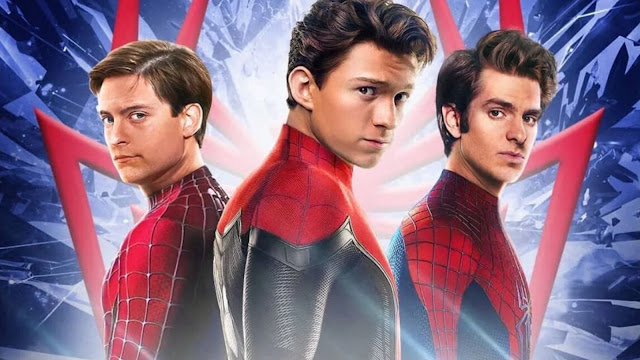 Do I dare
Disturb the universe?
In a minute there is time
For decisions and revisions which a minute will reverse.
--T.S. Eliot, THE LOVE SONG OF J. ALFRED PRUFROCK

I was only moderately entertained by the first two MCU/Sony collaborations on the SPIDER-MAN franchise, and I had no reason to think that Number Three would be any different. When I heard that advance sales were breaking records, I tended to put it down to a lack of competition in U.S. theaters. But I started hearing positive reviews from sources I respected, so, despite having boycotted ETERNALS and SHANG-CHI among others, I queued up and bought my ticket. SPOILERS apply throughout, naturally.

One review asserted that the Sony people may have been more in control of the script than the MCU/Disney people. That alone might be one reason as to why WAY provides a massive crossover of all three live-action movie versions of Spider-Man-- Tobey Maguire from the Sam Raimi trilogy, Andrew Garfield from the Marc Webb duology, and Tom Holland from the Jon Watts neo-trilogy. In addition to bringing together all three versions of Spider-Man-- in what might be considered a GOOD version of SPIDER-MAN: INTO THE SPIDER-VERSE-- WAY also brings together five villains from the earlier franchises: the Lizard (Ryan Ifans), Electro (Jamie Foxx), Sandman (Thomas Haden Church), Doctor Octopus (Alfred Molina), and the Green Goblin (Willem Dafoe). The effect is that the Holland-verse gets a much needed infusion of Classic Spider-continuity, though since all five villains come from other heroic universes, they probably won't come back for encores right away.

The means by which the continuities become interwoven is probably partly derived from MCU's concept of "rewriting reality" in AVENGERS: INFINITY WAR, and partly from the ending of the first IRON MAN, in which Tony Stark impulsively reveals his superhero identity to the public, in marked contrast to the comic book series. It's arguable that the entire arc of the previous MCU film, FAR FROM HOME, existed to set up this Big Reveal, in which the villainous Mysterio, dying from self-inflicted wounds, unveils Spider-Man's secret identity to the world and attempts to frame the hero for murder.

The second part of Mysterio's plan doesn't have the slightest effect upon Peter Parker's life, and this major plot-hole is one of the things that most reminds me of an MCU film. The viewer never knows why none of the legal agencies ever show the slightest interest in investigating the alleged murder. There's a sequence in which a government agency arrests Parker, his girlfriend, his best friend and his Aunt May, but their only concern is whether or not the four of them had anything to do with appropriating government-tech-- and that concern evaporates with ridiculous ease because it would have interfered with the important part of the story.

Even when the law-dogs lay off, Parker's life turns to crap because everyone knows of his double identity, and it also affects the lives of his high-school buddies. Since Parker doesn't have the resources of a Tony Stark, who could insulate himself from the public with his money, he eventually gets the idea of "rebooting" his reality, since he saw it done twice in his AVENGERS films. He seeks out help from Doctor Strange (Benedict Cumberbatch), who tells him that it's a stupid idea. Then Strange comes up with an idea almost as stupid: to cast a massive forgetfulness spell designed to eradicate the public's knowledge of Parker's identity. (One wonders if the spell had the ability to erase Mysterio's original broadcast and the multitudinous recordings of news broadcasts resulting from the Spider-Reveal.) But in another display of MCU goofiness, Strange and Parker manage to muck up the spell by not preparing the parameters in advance. This scene is almost like a Laurel and Hardy routine, though it's somewhat saved by the opposition of Holland's nerdiness with Cumberbatch's waspish hauteur.

The accidental side-effect of the botched spell is that it penetrates into alternate universes and spirits into the Holland-verse other characters who know of Parker's double identity-- which means the aforementioned five villains and, later on, the other two Spideys. (There were early plans to have Kirsten Dunst show up as the first Mary Jane, though this didn't work out.) Doctor Strange collaborates with Spidey and his two friends to capture the five villains and send them back to their own universes-- which, as far as it goes, sounds like any number of routine "get rid of the illegal aliens" trope.

But the script then takes a radical new turn. The Holland Spidey has been represented as somewhat more innocent than either the Maguire or the Garfield versions, and even the spell-mucking scene draws upon that concept, since Holland-Parker messes things up due to not wanting to lose his connections with the people he values. Once Parker learns that all of the otherworldly villains became corrupted by their mutations, he gets the idea that he ought to give them all a "second chance" by curing them of their respective manias before sending them back. Doctor Strange disagrees, but Spidey manages to trap the magician in another dimension following a suitably mystic contretemps between the two classic Lee-Ditko characters.

Parker briefly manages to convince the five villains to let themselves be cured, though Electro and the Goblin seem to be high-risk types. In fact, moments after Parker and his friends manage to cure Doc Ock, the other villains rebel, resulting in a chaotic melee in which Aunt May perishes, and then all of them flee. It's only after that Parker's buddy Ned accidentally summons Maguire-Parker and Garfield-Parker into the Holland-verse, and all three Parkers unite in the mission to give the villains their "second chance"-- including the Goblin, who was responsible for May's death-- which means that there has to be a ton of hero-villain battles at the conclusion before the universe can be stabilized. And on top of all this, Holland-Parker not only loses his aunt and his new "brothers," everyone in the Holland-verse does indeed forget the true identity of Spider-Man.

And at last I can reveal my reason for quoting Eliot at the start of this review. Other Spider-Man films, particularly the first SPIDER-MAN, correctly translated the sense of the original comic:

... the script for SPIDER-MAN seems acutely aware that Peter Parker’s seemingly accidental acquisition of spider-powers functions in the story as a Gift from Above. He abuses that gift by not using his power in the public interest—i.e., to prevent a criminal from escaping the law—and he pays for his neglect when the same crook murders Parker’s beloved Uncle Ben. In both the comic and the movie, Parker is chastened by this development, but goes further by taking on the role of a crusading superhero. The role is not without its perks—Parker even out of costume becomes more appealing to girls, and he continues to enjoy the thrills of spider-powered athleticism. But his great power doesn’t just create a sense of responsibility. The costume sometimes becomes more of a hair-shirt, as bad luck frequently dogs his steps, often making him think of his abilities as an ongoing curse.

However, one thing that WAY does that other Spider-flicks don't is to suggest that Parker's psychological struggle to redeem himself is also a search for a "way" to act properly in a world where even the best intentions can lead one to perdition. Prufrock asks if he dares to disturb the universe, and that's the dilemma with which Holland-Parker struggles when he considers the possibility of giving a second chance to men who largely don't seem to deserve it. I've seen my share of superhero films in which heroes jump through hoops to redeem characters I didn't particularly like, ranging from the Ghost in the MCU's ANT MAN AND THE WASP and the Asian kid in DEADPOOL 2. But in NO WAY HOME, the viewer is obliged to contemplate whether the act of villain-redemption is worth it when it has so many negative consequences. But WAY does have a more substantial reason for having the hero suffer from his hair-shirt: he purges himself of his own negative nature and embraces his fate as a redemptive hero. The worst thing about WAY is that I really don't know where the series can go from this, since further iterations may start to seem like "It's a Wonderful Life, Part 2."