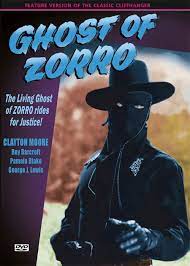 This was both the last and the least of the American "Zorro" serials, so maybe a better title would have been "giving up the Ghost of Zorro."

Hero Ken Mason (Clayton Moore) is supposedly the grandson of the original masked cavalier, but aside from his having a Mexican guy serving as his aide-- presumably a parallel to the Bernardo character from the original stories-- there's no attempt to emulate the Zorro mythos. The serial follows a familiar template: a community-- sometimes just a town, sometimes a whole state-- is seeking to gain protection from American jurisprudence, while outlaw elements seek to keep the status quo. The script doesn't show us much of the outlaws' depredations, though there's an offhand comment that gangs like those of "Jesse James and the Daltons" use Twin Bluffs as one of their hideouts. Though the square citizens of the town don't know it, one of their upstanding citizens, Joe Crane (Gene Roth), is the secret leader of the gangs. When an elderly entrepreneur and his daughter Rita (Pamela Blake) try to set up a telegraph office that may lead to the ingress of lawmaking elements, Crane has the old guy killed.

Fortunately, before he dies Rita's father invites a new engineer to help lay the wires, and this turns out to be Mason. Rita thinks he's an eastern dude, not knowing that Mason's forbears once owned land in that general area, though the script spends no time on these matters. When Mason finds out that lawless elements control the town, he takes up the mantle of his ancestor Zorro, supposedly to convince the crooks that he actually is Zorro's ghost, though Mason does not have any tricks to suggest any spectral nature. Thus none of the villains seem the least bit convinced that the new Zorro is anything but a masked mortal. The serial is largely composed of routine endeavors of Crane's thugs to undermine the telegraph, though one source of conflict doesn't stem from the outlaws. A gung-ho sheriff comes to town for a couple of episodes, trying to bring the vigilante Zorro to justice, and this almost leads to Mason being lynched-- which is the only time the serial becomes a little bit compelling.

The other principals are competent but there's little to work with here, even in the routine action-scenes. Unfortunately Clayton Moore only gets to use his own sonorous voice for Mason, while some other actor dubs Zorro's lines. The only real significance of this mediocre effort is that supposedly in the same year the serial was released, the casting people for the 1949 LONE RANGER teleseries got a look at GHOST, and so Moore secured the role, leading to a long association with that character, to the extent that many fans think of Moore as the quintessential Lone Ranger.

Posted by Gene Phillips at 3:40 PM
Email ThisBlogThis!Share to TwitterShare to FacebookShare to Pinterest
Labels: combative adventures, outre outfits (u), the uncanny