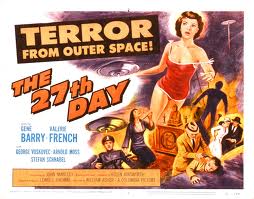 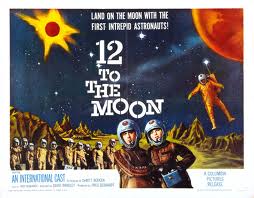 These two films from the Golden Age of Cinematic SF probably don't appear in most people's lists of the era's best efforts.  Their problems are essentially opposite to one another.  The first looks pretty good but its story flags and its theme is badly communicated. The theme of the second is reasonably consistent but the film's cheapjack budget caused it to be consigned to MYSTERY SCIENCE THEATER 3000.

27TH DAY started as a novel by John Mantley, which according to some reviews includes many points of difference from the screenplay.  This was written principally by Mantley himself, later a producer in television, as was the film's director William "BEWITCHED" Asher.  DAY focuses on what might be best described as a "Scruples" proposition framed in the context of a science-fiction drama, to wit: "What would you do if you had the power to destroy the world?"

A group of aliens give five Earthpeople the chance to find out.  The five randomly chosen individuals-- an American, a Brit, a German (with pro-American sympathies), a Chinese and a Russian-- are whisked to an undisclosed location.  A representative of the abductors (who are never seen en masse) tells the abductees that his people need a new place to live, and they would like to take over the Green Hills of Earth before the humans destroy their own world.  However, though the aliens have technology far superior to that of Earth, their moral code prevents them from directly dispossessing the humans.  They can however make it easier for the Earthpeople to destroy themselves.

The aliens give each of the Earthpeople a set of capsules.  If any of the quintet willingly causes the capsule-container to open, the capsules therein can then be used to extinguish whole populations.  Unlike the atom bomb the capsules can even get rid of an enemy people without devastating the cities or poisoning the earth.  Plainly the aliens are hoping that the Earthpeople will be pressured by their fellows to use the capsules to end the Cold War in one side's favor, ending with everyone killing everyone and leaving the field clear.  The aliens also further stage-manage the coming crisis by going on the airwaves and publicly revealing the names of the capsule-custodians (though only four, since Asher and Mantley bring about the death of one custodian soon after all five return to Earth).

The basic setup is rife for a great paranoia narrative, with the custodians trying to prevent their governments from using the doomsday weapons.  However, Asher and Mantley take the easy way out.  When the "good guys" (American, Brit, and German) are captured by the American government, the representatives of democracy don't stoop to coerce the trio into releasing their capsules.  The representatives of Soviet Communism, however, are only too willing to torture and bullyrag the Russian representative into giving up his weapon.

In a contrived happy ending, at the eleventh hour (which is also the "27th day," the day when the capsules run out of juice), the Soviets try but fail to zap the democracies out of existence.  The Americans activiate theirs, but it doesn't kill everyone in the opposing hemisphere, just all "enemies of freedom."  The German decides that this proves that the basic impulse of the aliens was actually helpful in nature, which makes one wonder what would've happened had the Soviets triggered their device first.  In any case, the democracies think it would be a shame to let the aliens wither away-- especially since they possess so much advanced technology-- so they invite the homeless extraterrestrials to set up camp in the now-deserted parts of Earth.  As a bonus, the aliens also reveal-- entirely out of left field-- that they want to invite the Earthmen to join a vast galactic empire.  All of which proves, I guess, that not every deal with the devil turns out badly for the deal-maker.

TWELVE, directed by the man whose only other major credit was THEY SAVED HITLER'S BRAIN, arrived in theaters about ten years after the cinema's landmark lunar adventure, DESTINATION MOON.  Where DESTINATION was scrupulous in its use of "real science" to describe a feasible moon-voyage, TWELVE only makes token attempts toward accurate science, though it does try, however feebly, to capture the aspect of life I term "cosmological:" the aspect of learning and making significant the phenomena of the physical world.

TWELVE's real focus, as with DAY, is sociological.  The moon-ship is manned, as the title says, by a whopping twelve astronauts, each of whom is a different science-specialist from a different country, and they also further burden the rocket by taking along an assortment of experimental animals.  The scientists' desire to investigate the moon's nature is explicitly secondary: the real purpose is to mount a United Nations-like initiative to decalre the moon "international territory," which no Earth-nation can then claim for its exclusive use.  This is certainly an interesting twist on the more common trope of moon-travel both real and imagined, where it was assumed that the first nation to the satellite would control it thereafter.

In addition, the multinational group hopes to leave behind the fractiousness of their native countries with this joint effort.  In some respects they seem successful: both the two females and the black African navigator are treated in a professional manner by their male white counterparts.  However, not long after takeoff the Israeli scientist Ruskin alludes to the way his family dies in WWII, and he resents the German scientist Heinrich just on principle.  The commander (American of course) frets about their having brought "all that muck" with them.

In short order, despite getting battered by some meteorites on the way, the explorers land upon the moon.  However, during their explorations they're assailed by various dangers, such as "lunar quicksand," which cuts their number down to eleven.  During the astronauts investigaton of a deep cave, two more members-- the medical team, a man and woman already in love-- disappear.  The remaining 'nauts get back to the ship, but while the injured German member is incoherent, he accidentally reveals to Ruskin his guilty secret: he just happens to be the son of the Nazi who exterminated Ruskin's family.

Then the surviving 'nauts receive a coded broadcast from the moon's native inhabitants.  The lunarites relate that they have the couple in custody and are studying them to see if their love "turns to evil."  They order the humans to leave, and the humans do so.

However, the lunarites aren't through with humanity.  As the lunar rocket comes closer to the Earth, they find that the Western hemisphere has been bombarded by a freeze-ray from the moon.  Desperate to save their people, the scientists decide that there's one way to dispel the ray's effects.  They can dispatch a "space taxi" from their rocket (gee, that rocket has all the comforts of home) down to Earth, drop an atom bomb down the volcano Popocatepetl, and that will reverse the ray's effects.  (I wish I could see what MST3K had to say about that plan.)

However, impossible though the scheme is in a scientific sense, it still serves a sociological function in two subplots.  Orloff, the Russian member of the team (the redoubtable Tom Conway) comes across the French member trying to sabotage the bomb; when questioned, the Frenchman tries to persuade the Russian to help exterminate the West.  Acting against type for a Russian of the time, Orloff fights with the Frenchman until the American captain arrives to subdue him.  Then, just to further the ideal of international amity, the German and the Israel bury their history and pilot the ship down into the volcano, where they lose their lives.

However, the sacrifice impresses the lunarites, who change their minds and broadcast that they value human love and emotions after all, and swear to make humans welcome on the moon.

Aside from being more thematically consistent than 27TH DAY-- which would have been more honest had it been framed as an anti-Communist screed from the opening-- TWELVE is a little more interesting in terms of the way scripter DeWitt (CAT PEOPLE) Bodeen threw out unusual story-ideas, though most of them don't come to anything.  The couple left behind on the moon aren't mentioned again, though one assumes that they got to go home once the aliens changed their minds.  Perhaps the same applies to the mission's experimental cats, because before the Earthmen leave, the aliens ask them to leave behind their cats, because the lunarites are fascinated by felines.  Maybe that was Bodeen reminiscing over better times with CAT PEOPLE?  During the exploration scenes, Orloff seems fascinated with a big jewel he dubs (for no clear reason) "the Medea jewel," which later catches on fire aboard ship; Orloff also burns his hands when he sticks them into a stream of what seems to be molten gold.  These incidents seem to imply some castigation of human greed but the moral is never made explicit, so their potential symbolic power lies stillborn.

Posted by Gene Phillips at 2:45 PM
Email ThisBlogThis!Share to TwitterShare to FacebookShare to Pinterest
Labels: the marvelous