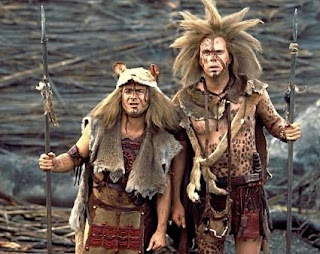 
Scripted from a George Lucas story and given a John Williams-sound-alike score by James Horner, WILLOW proves that Lucas and director Ron Howard should have stuck with taking inspiration from serials.  Even calling WILLOW “Tolkien-lite” might insinuate that it possesses even a fraction of the complexity of THE LORD OF THE RINGS.

WILLOW is best regarded as a lively sword-and-sorcery opus with a higher budget than most such efforts.  As with most S&S, the film builds its fantasy-scape out of all sorts of mythic odds’n’ ends. The main character Willow Ufgood (Warwick Davis) is one of a race of dwarfish people called “Nelwyns,” but the rest of the fantasy-peoples are taken from the same European folklore Tolkien raided, yielding the usual crop of elves, trolls, and brownies.  However, human beings are called “Daikinis,” a name lifted from a species of Hindu fairies.  Some names, like Willow’s, are meant to sound vaguely Celtic, but as in most S&S tales other names sound borrowed from a potpourri of sources, as with “Sorsha,” “Bavmorda,” and “Madmartigan.”

The film begins on a “slaughter of the innocents” theme, as the tyrannical sorceress Bavmorda seeks to find an infant who, according to prophecy, will bring about the evil queen’s doom.  The special girl-child, Elora by name, is spirited away by a midwife and sent on a Moses-like journey down a river, where she’s found by Willow’s family.  Unlike Frodo of LOTR, Willow has a wife and two children, so he isn’t too keen on getting involved in the affairs of the oversized Daikini people.  When one of Bavmorda’s beasts attacks Willow’s community, the Nelwyns send a “fellowship” composed of Willow and a few others to give Elora back to the first Daikini they meet.

Much to Willow’s disgust, the first Daikini they meet is a thief penned up in a cage, name of Madmartigan (Val Kilmer).  The Nelwyn fellowship breaks up almost immediately thereafter (so much for that bit of Tolkien-imagery!), for most Nelwyns are eager to let this disreputable human take charge of the infant. With great reluctance, Willow acquiesces and lets Madmartigan take Elora, but the infant is summarily snatched by brownies and Willow once more goes in search of her.  After a few more adventures he partners up with Madmartigan once more, who’s also taken a reluctant shine to the wonder baby.  Meanwhile they encounter one of Bavmorda’s military detachments, led by Bavmorda’s swordswoman daughter Sorsha.  The two heroes spend most of their time dodging soldiers and making new allies before their inevitable confrontation with the evil sorceress.

The overall plot of WILLOW is pretty shaky: though the tale begins by claiming that Elora is supposed to overthrow Bavmorda, in truth her only role is to motivate the two heroes and their allies to oppose the villain.  Willow, unable to fight on the level of his allies, manages to hoax the enchantress.  Yet Bavmorda’s ultimate defeat comes about because of the chance intervention of a lightning bolt, which was a melodramatic cliché back when Sade made fun of it in JUSTINE.

The best parts of WILLOW are the light-hearted character bits.  Madmartigan and Sorsha initially seem to despise each other, but their true feelings are liberated when the hero is exposed to a “love-dust” courtesy of two brownies. (Actors Kilmer and Whalley were married following completion of the picture.)  The brownies Rool and Franjean, who talk with Cajun accents, provide consistent and often much-needed humor whenever the action gets a little too routine.  Ron Howard’s direction of the splashy action-scenes is competent but no single scene is particularly memorable.  Bavmorda is a cardboard villain, evil purely for the sake of being evil. Lucas’ story might have dwelled a little on the unusual relationship of a tyrant-sorceress with a swordswoman for a daughter.  But the script never allows the slightest reflection on how Sorsha feels toward her witchy mother, either while serving her or betraying her.  As with most sword-and-sorcery films, there are no deeper metaphysical themes to the concept of magic: spells are just another weapon.

At its core, WILLOW is a “buddy film.”  The titular character is a husband and father who is marginalized by his own community.  A wealthy Nelwyn disparages Willow as both a “farmer” and a “clown” (the latter because Willow performs feats of stage-magic).  Willow aspires to learn real magic, but even when he gets his own wand in the course of his quest, he never successfully performs a spell.  Ironically he achieves his greatest success with the use of “phony magic.”  In contrast, Madmartigan is a tough fighter, and so much a loner that his only acquaintance disparages him for being loyal to no one.  This is perhaps the strongest borrowing Lucas took from Tolkien.  In LOTR Frodo is a humble figure forced to take extreme actions, while Tolkien’s human protagonist Aragorn is a more glamorous hero-type who in a sense plays second fiddle to Frodo.  Willow and Madmartigan interact more personally than do Frodo and Aragorn, but the formula of pairing humility and glamour remains constant.