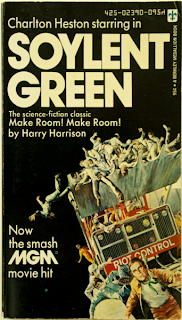 In the early 1970s one saw many films as slow-paced as Richard Fleischer's SOYLENT GREEN, possibly due to the influence of the European New Wave on some filmmakers.   Compared to the relentless hell-bent-for-leather pace seen in most contemporary films, such a leisurely approach is often pleasing.

However, even keeping in mind the excesses of the Jerry Bruckheimer era, I found SOYLENT pretty dull.

Fleischer had long ago proven his skill with well-paced narratives, whether in the domain of the isophenomenal (THE NARROW MARGIN) or the metaphenomenal (20.000 LEAGUES UNDER THE SEA).  Since he had long ago shown his chops on many previous films, I tend to believe that Fleischer's normal talents were compromised by the demands of the dystopian script.

Like many people, I've probably heard the famous quote (or some variation thereof)-- "Soylent Green is people"-- more often than I've seen the film.  Like the true identity of Mister Hyde, it's hard to remember a time when one didn't know the Big Reveal of SOYLENT, the last of Charlton Heston's three big-time SF-features of that period.  In all of them Heston's characters are often depicted , often conferring Christlike motifs of suffering.  As I've not read the Harry Harrison novel on which the movie's based, I don't know how strongly such motifs appear in the novel.  However, the protagonist's name in the book is not "Thorn," which name by itself suggests Christlike suffering, as does the last shot in the film: Thorn's bloodied hand reaching toward heaven as he's carried away by the men who are about to betray and slaughter him.  In addition, I'm informed that there is no theme of cannibalism in the novel, which suggests that the screenwriter may have contemplated extending the myth of communion into the theme of a novel on the overpopulation theme.

That said, the police-procedural scenes of the film, in which Heston slowly seeks to ferret out the reason for the murder of a high official, didn't sustain my interest.  I felt that the film made its basic point early on-- overpopulation is bad-- but it never managed to score any deeper insights.  The scenes in which lowly cop Heston seduces (or is seduced by) high-rolling call-girl Leigh Taylor-Young lack either tension or eroticism.
Far better in terms of character are Heston's scenes with his quasi-mentor figure Sol Roth (Edward G. Robinson in his final film-performance), though in a sense I thought Robinson's scenes would have played better against a younger actor, who might've seemed more in need of counseling than fifty-year-old Heston.

However, SOYLENT does sport one magnificently surrealistic scene, in which police disperse unruly crowds by turning "the scoops" loose on them. In contrast to the overly slow resolution of the mystery of Soylent Green, the sight of the scoop-vehicles indifferently catching up hapless human beings and dumping them into their interiors-- implicitly for recycling as processed food-- remains one of the most striking images in all of science-fiction cinema.
Posted by Gene Phillips at 3:54 PM
Email ThisBlogThis!Share to TwitterShare to FacebookShare to Pinterest
Labels: the marvelous