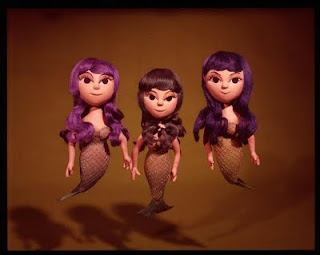 "It's the dull stuff that makes the world go around these days."-- Papa Andersen in THE DAYDREAMER.

Early on, when young Hans Christian Andersen (called "Chris" throughout the film) is grousing about the drudgery of his homework, his mild-mannered pop gives him the above advice.  It's not intended as a statement of the theme for this odd Rankin-Bass concoction of live-action and stop-motion animation, but it fits nevertheless.  Despite the fact that the film is being promoted as a recapitulation of the real Andersen's imaginative (if sometimes depressing) fantasies, the story seems to have very little to say about the nature or value of fantasy.  It urges practicality and conformity, and seems faintly hostile to the idea of fantasy, even in this mild "uncanny" form, where the mermaids and giant frogs are all part of a boy's daydreams.  The script-- co-written by producer Arthur Rankin Jr and directed by his partner Jules Bass-- even loosely implies that excessive fantasizing leads one to acts of egregiously selfish behavior.  This might be a valid theme if the filmmakers had pursued it diligently, but the script waffles and never really makes any point more profound than "there's no place like home," roughly in the vein of Maeterlinck's BLUE BIRD.  (Interestingly, the 1940 Shirley Temple adaptation of the Maeterlinck play also focused on an extremely selfish child, which according to Wikipedia is not an element in the original play.)

At the outset Papa Andersen (Jack Gilford), a kind old shoemaker, makes the mistake of telling his discontented boy-child a story about the Garden of Paradise, where no one has to work for food and knowledge. Chris, having already established himself as the sort of kid who asks his widowed father to sell his wedding ring so that they can have fun with the money-- decides he's leaving in pursuit of Paradise, where he'll never have to do homework.  He's quite unmindful of the distress this will cause his doting dad, who drops everything to look for his wandering boy as soon as he learns of Chris running off.
Chris takes a boat looking for Paradise.  He dreams that a storm smashes his boat and that he sinks, drowned to death, to the undersea world of King Neptune and his mermaid daughters.  One of them, the forerunner of adult Andersen's "Little Mermaid" (Hayley Mills), falls in love with the dead boy and makes a bargain with the Sea Witch to restore his life.  The bargain is naturally not quite the same as in the Andersen tale, but it ends just as badly for the Little Mermaid.  Chris soon leaves her underwater domain, still looking for Paradise, and unaware that the Mermaid has sacrificed her happy life in the sea for his sake.
Chris wakes from his dream, still in his boat, which he then navigates to shore.  This establishes the film's basic narrative pattern: every time "real Chris" stops in his journey for a sleep, "animated Chris" takes over and encounters figures from the stories Andersen will write as an adult.

Next up, Chris visits the world of "The Emperor's New Clothes."  This is a pretty efficient retelling of the classic tale; however, it has nothing to do with Chris' journey and deals a serious blow to the narrative momentum; a blow from which the film never really recovers.  It does little except to show that Chris isn't too bright in addition to being selfish; the crooked tailors of the story use him as a stooge and he's as fooled by their manipulations as the Emperor and (almost) everyone else.

The story more or less gets moving again when "animated Chris" encounters Thumbelina (Patty Duke), who's also searching for Paradise.  However, in their travels they're forced to deal with two evil animals, the Rat (Boris Karloff) and the Mole (Sessue Hayakawa).  This "adventure" is pretty dull but it goes even further to show how callous Chris is toward a wounded sparrow, in contrast to how Thumbelina gives the creature aid.  In return the sparrow offers to take Thumbelina to the Land of the Little People, which is Paradise to her.  But it's not Paradise to Chris-- even though he's the same height as the girl-- so he breaks off from her and goes looking again.

Chris does finally find his Garden of Paradise, with guidance from that guardian of dreams, The Sandman.  The Sandman doesn't approve of Chris' selfish actions.  Chris claims that he'll do better, and the Sandman does lead him to the Garden (populated, like Adam's, only by himself and various animals).  But like Adam, Chris is given an injunction not to eat the "flowers of the Tree of Knowledge" (maybe the scripters thought the traditional apple would smack of blasphemy).  Chris promises not to touch the Tree, thinking he has no needs in a world where all of his wishes will instantly come true.

However, no sooner does the Sandman depart with Chris' promise than a "devil" shows up, though this devil looks to be a boy Chris' age, albeit with horns, and he's dressed more like Pan than Satan.  The tempter talks Chris into doing what he surely wants to do anyway, claiming that the blossoms of knowledge will reveal how Chris can make it in the real world.  The fact that Chris falls for it indicates that he really wants to excel  in the real world; he just doesn't want to work for it.  Chris is thus expelled from the last of his wild dreams, which means that he wakes up to his real self's problem.  He's captured by a cruel guardsman who has already taken his father prisoner for supposed poaching activities, and both stand in danger of being servants for the rest of their lives.  But Papa Andersen wins free by offering the guard his wedding ring in exchange for their freedom.
By story's end, Chris is finally attacking his books with real diligence.  The Sandman observes that in many ways he wasn't much worse than anyone else, but that Chris will find his Paradise as an adult, when he writes his great fairy-tales on the subject of mankind's foibles.

It's a little refreshing to see a kid-protagonist who's not overly nice, and Chris does resemble some of Andersen's less admirable protagonists.  But he seems to give up his selfishness largely because he has no choice, not because he's impressed by his father's magnanimous gesture.

It's ironic that just one year later, the same production-team came out with MAD MONSTER PARTY, which celebrated the power of fantasy (not to mention making a much better use of Boris Karloff).  Maybe PARTY benefited from the fact that movie-monsters aren't expected to be as proper and moral as certain fairy-tales and their purveyors.
Posted by Gene Phillips at 2:19 PM
Email ThisBlogThis!Share to TwitterShare to FacebookShare to Pinterest
Labels: delirious dreams and fallacious figments (u), the uncanny