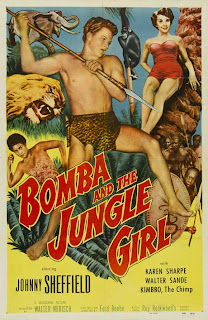 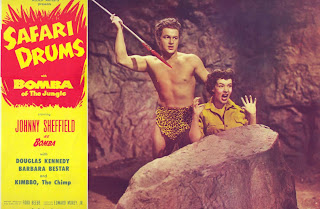 Though the Bomba films continued to follow pretty simple courses in the eighth and ninth outings, these two are at least lively compared to the earlier two.  On a minor note SAFARI DRUMS is the second film to assert that Bomba could talk to animals and persuade them (up to a point) to do his bidding.

BOMBA AND THE JUNGLE GIRL is the first film in which Bomba becomes curious about the parents that brought him to the jungle, and how it happened that they died and left him to be raised in the care of an unrelated white explorer.  When Bomba explores the effects of his deceased father-figure, he discovers a mutilated diary.  He tries to read it (keeping a bit of continuity with his increased reading-skills in ELEPHANT STAMPEDE) and finally gives the diary to Commissioner Barnes.  Barnes directs Bomba to a particular Masai village; according to the diary, Bomba's late parents were buried in the network of caves adjacent to the village.

On his way to the village, Bomba encounters the "jungle girl"-- or in actuality, one of two "jungle girls" important to the story.  Linda (Karen Sharpe) is really just a civilized girl who happens to be in the jungle as an assistant to her father Ward, who travels amongst the local tribes performing some form of vague "inspections" on behalf of the colonial government.  Bomba first sees Linda swimming in a local river, which to seasoned Tarzanphiles always connotes the aquatic ballets of Weismuller and O'Sullivan; however, the sight of Karen Sharpe in a full bathing suit is about all the eroticism one gets here.  Bomba saves Linda from a crocodile, but in a rare turnaround, she reaches shore and finishes off the croc herself with a rifle-shot.  Linda proves no less resourceful in later scenes, wielding her rifle to prevent the jungle-boy from being executed by natives, and later, in a combat scene, shooting one native off Bomba.

Linda escorts Bomba to the village, where he makes inquiries about his parents to the tribal chief Gamboso and his domineering daughter Princess Baru (Suzette Harbin).  The two of them give Bomba no info about his parents, and they claim that the tribal woman who nursed baby Bomba has died.  However, the old woman isn't dead, for her grown son seeks out the jungle boy and brings Bomba to her.  The old lady, blinded to force her to keep silent, reveals that Gamboso took over the tribe from the rightful rulers and had Bomba's parents killed so that they couldn't report the takeover to the white government.

A blowdart kills the blind woman, and Princess Baru-- whose unusual "authority" over the tribesmen is remarked upon by Ward-- accuses Bomba.  Linda and Ward don't trust the natives to take Bomba back to the regional authorities, and they liberate him. In retaliation Baru ambushes Ward's safari as it heads home.  Bomba manages to save Ward and Linda but most of the bearers are killed or driven off.  This forces the good guys to take refuge in the nearby caves-- at which point Bomba finds the graves of his parents, and his father's diary, which records the usurpation of the old tribal rulers.  Gamboso and Baru pursue the heroes to the caves, at which point it's revealed that Baru used the blowgun on the old woman.  Bomba and Linda fight it out with Gamboso and Baru.  Oddly, though Gamboso is simply defeated and captured, Baru is given an odd death-scene when she rushes out of the cave into a raging fire and is burned to death.  Gamboso is taken to the authorities and Bomba swings off, leaving Linda pining for more of his company.

What's most interesting about JUNGLE GIRL is that the title could almost apply as easily to Baru as to Linda, given that Baru really has grown up in the jungle (though the title suggests that the audience is going to encounter something more along the lines of a juvenile Sheena).  Prior to this 1952 film I can't think of any black females who are as formidable as Baru: the only "black female villains" I've seen are temptresses like the Georgia Brown character of CABIN IN THE SKY.  Jungle-adventure comic books sometimes included black females as villainous high priestesses and the like, but often such characters weren't drawn to look like African blacks, just dusky versions of white women.  It's also interesting that when Baru gets into a catfight with Linda, Linda loses and has to be rescued by Bomba.  So at least Baru gets to kick a little whitegirl ass before her big death-scene.

SAFARI DRUMS doesn't offer any characters as interesting as Baru, but it does return to the series' vaguely pro-ecological theme.  Rich Larry Conrad, a return to the "Ugly White Explorer" theme that launched the series, launches a safari into Commissioner Barnes' territory hoping to film exotic (read: violent) encounters with the local wildlife, for sale back in the States.  Barnes doesn't expect that Bomba will be sympathetic to Conrad and his party-- one of whom is young female assistant Peg-- but he sends a drum-message to Bomba anyway.  Bomba sends one back, essentially saying 'no."  Despite the prominence of "drums" in the title, they never play any role in the story greater than providing an exotic communication-system.

Conrad's party sets out without Bomba's guide-services, but two secrets accompany the safari.  After their departure Barnes learns one secret from local authorities, who tell Barnes that an unidentified murderer has apparently joined the safari.  This motivates Barnes to send a new message to Bomba, asking him to pose as the safari's guide and keep them busy until the local constabulary can overtake the caravan.  Bomba does so, and even uses his talent at calling animals to give the photographers more exotic subjects-- though with the stipulation that they can't needlessly shoot any of them.  When a trigger-happy fellow named Brad does shoot a lion, pretending to do so in self-defense, it's almost a given that he's going to be the killer.

Peg befriends Bomba and soon reveals the group's other secret: in one of the party's trucks Conrad's brought along a caged tiger.  Conrad plans to trap a lion and force it to fight the tiger in order to get exciting footage for the American audience.  Bomba refuses to help and deserts Conrad, yet tries to stay close to trap the killer and prevent the fight.  He's successful in the first respect but not in the last.  Apparently Monogram had access to some other film that staged a lion-tiger fight, and director Ford Beebe edited those scenes into this film, thus giving the audience the very sight that the script finds immoral.

The end is rather amusing.  Conrad, sheepish at having brought a killer along, confronts the local authorities, afraid that they might take his film away.  The colonials admit that there's no actual law against filming a lion-tiger fight-- not least because there are no tigers in Africa-- and permit him to keep his film.  However, Bomba's chimp friend Kimba intervenes with vigilante justice, exposing Conrad's film to sunlight and ruining Conrad's photographic epic.  The series doesn't always manage to dole out justice to its Ugly White (but non-criminal) Explorers, but SAFARI makes a happy exception.
Posted by Gene Phillips at 2:37 PM
Email ThisBlogThis!Share to TwitterShare to FacebookShare to Pinterest
Labels: combative adventures, outre outfits (u), superlative skills (u), the uncanny