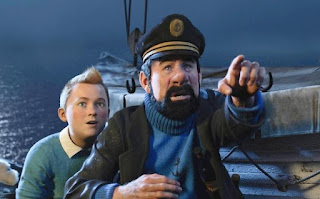 In one of my ARCHIVE posts I caviled at R.G. Young, author of THE ENCYCLOPEDIA OF FANTASTIC FILM, for being too careless in his (unexplained) judgment of what he chose to label as "fantastic."  His tome contained dozens of thrillers, melodramas and adventure-films that in my view did not in the least shade into the domain of the fantastic (or, as I constantly rechristen it, "the metaphenomenal.")
Nevertheless, there are some adventure-films that are so wildly cavalier in their near-defiance of rationality that I can see the temptation to include them under in the ranks of "fantasy films," particularly swashbucklers like THE BLACK PIRATE and THE CRIMSON PIRATE.  Yet in my estimation such films finally fail the test of "irreducible strangeness" that should be characteristic of metaphenomenal works.  And despite the medium of Steven Spielberg's THE ADVENTURES OF TINTIN-- in essence a cartoon, however computer-generated-- it too essentially lacks that "strangeness."  To reference a remark by C.S. Lewis-- examined in depth in this essay-- Spielberg's TINTIN is all about the threat of tigers, with no ghosts or gods even suggested.

This is not only an interesting contrast to Spielberg's previous high-adventure brainchild Indiana Jones-- who was usually if not invariably stumbling across arcane magical doodads-- but also to the original TINTIN stories, many of which included metaphenomenal fantasy or SF concepts.  I'm told that ADVENTURES OF TINTIN reproduces (with some reshuffling) and combines the events of three separate TINTIN albums. Not having read these for many years, I can't comment on the artfulness of Spielberg's adaptation, but for the most part the film's basic logic and clarity of events is admirable, particularly in a film-market where FX-films are assembled out of incoherent bits and pieces (2004's VAN HELSING, for example).  Given that Spielberg had held the rights to TINTIN since 1983, it would seem he had more than a little time to map out just how he wanted to do it.
Like RAIDERS OF THE LOST ARK, ADVENTURES is a treasure-hunt film, with young reporter Tintin (Jamie Bell) seeking to find the lost pirate treasure of Sir Francis Haddock before the evil fortune-hunter Sakharine (Daniel Craig) and his hired thugs can do so.  Tintin makes common cause with the modern-day descendant of the famed privateer, but said descendant, Captain Haddock, is a drunken reprobate whom Tintin must constantly watch over and chastise in order that they may reach their common goal.

From my recollection of the French comics, I believe that Spielberg does a good job of realizing the "child playing father to the grown man" aspect that made the Tintin-Haddock relationship so fruitful, but it's arguable that Spielberg's version of Haddock represents a type that the director has often favored.  Haddock is in Blakean terms the face of "experience:" man at the end of his tether, symbolically one with Sam Quint of JAWS and Roland Tembo of LOST WORLD: JURASSIC PARK.  Haddock, fortunately, is redeemed by an avatar of innocence in Tintin, and for the most part manages to pull himself out of the bottle (although his sottishness is played for all the humor it's worth) and become a hero like his much-envied ancestor.  The backstory of Sir Francis Haddock even references a curse put on the Haddock line by a contemporaneous enemy-- pirate Red Rackham, the ancestor of modern-day Sakharine-- but in the end the curse is shown to have no substance.  Whatever effect it's had on Haddock's mind is banished when the captain chooses to follow the example of the indomitable boy reporter.

Tintin is, in essence, the incarnation of youthful beliefs in one's own immortality.  Thus, in the show-stopping Bagghar chase-scene, the young hero indefatigably pursues a flying hawk with such cavalier disregard for his own safety that one would almost think that he had knowledge of his own cartoony invulnerability.  But in essence these feats of derring-do may have less in common with those of Indiana Jones than with those of Buster Keaton.  Tintin isn't as flamboyantly skillful as Jones or similar swashbuckling heroes; rather, he seems to master all the realms he encounters-- the skies, the desert, the seas-- by a Keatonesque force of will.

None of the follow-ups to RAIDERS OF THE LOST ARK equal the first film for thrills and fun.  However, ADVENTURES is very nearly the equal of RAIDERS in sheer kinetic terms, though it lacks some of that film's deeper philosophical touches.  Again, I'm not sure what if any sequences in ADVENTURES are original with Spielberg, but even when channeling the spirit of Herge through the magic of computer animation, the director shows that his skill at blending humor and suspense remains undiminished.
Posted by Gene Phillips at 2:37 PM
Email ThisBlogThis!Share to TwitterShare to FacebookShare to Pinterest
Labels: combative adventures, diabolical devices (n), exotic lands and customs (n), the naturalistic