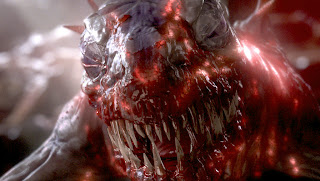 
I've always thought it a shame that so many Sci-Fi Channel movies (whether directed produced by the channel or simply conceived along similar lines) have followed the rather brain-dead "disaster of the week" format, usually with some gargantuan critter taking the place of a natural upheaval.  Next to most of these staggeringly ordinary works, "big bug" flicks from the 1950s, such as THEM! and TARANTULA, are mythic masterpieces.


OUTLANDER still includes a giant monster, but the script-- co-written by director Howard McCain-- does so with considerably more fun than most of the "colossal creature" flicks of recent years.  This is a little surprising, since McCain's most notable script before OUTLANDER was the rather-dull UNDERWORLD: RISE OF THE LYCANS, but then, no one's at their best taking over some other writer's franchise.


The plot comes down to the statement: What if both Beowulf and Grendel were aliens who fell to Earth amid a community of Vikings (Vikings being substituted for the less recognizable tribes of the epic poem).  The race of the humanoid alien Kainan (Jim Cazeviel) is destroyed by the monstrous Moorwen, who then flees to Earth with Kainan in pursuit.  He's taken prisoner by a tribe of Vikings (a couple of whom take the names of characters from the poem) and must convince them to be his allies against the monster.

This is essentially a basic socialization myth, in which the stranger who comes to defend the small town ends up becoming a part of it.  He's converted in part by the headman's daughter (Sophia Myles),  a feisty tomboy who doesn't want to marry the local alpha male but gravitates quickly toward the studly stranger.

There's no attempt to duplicate the deeper themes of BEOWULF the poem, and perhaps that's all to the best, given how poorly Beowulf has usually been served.  But the socialization theme gives the actors-- Cazeviel, Myles, John Hurt, and Ron Perlman-- some meaty material with which to work, putting them far ahead of the unfortunate stars of such monster-disasters as MEGAPYTHON VS. GATOROID.

Posted by Gene Phillips at 6:54 PM
Email ThisBlogThis!Share to TwitterShare to FacebookShare to Pinterest
Labels: combative adventures, the marvelous